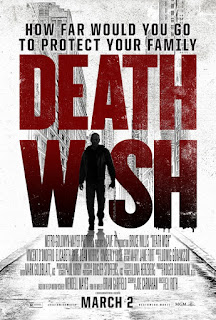 This is a film that will definitely appeal to gun enthusiasts.  It not only glorifies guns, but it drums in the message throughout about how important they are for protection.  Why, a gun can shoot an intruder in seconds, while it takes police minutes to reach you, exclaims the young, attractive gun dealer at the Jolly Roger.  The film opens up with numerous announcements of all the murders in Chicago, saying to the audience, “Be afraid.”
Then we get a picture of a golden family:  Father (Willis) a surgeon, mother (devoted and earning a Ph.D.), daughter (Morrone) just accepted by her first-choice university, and loyal uncle (D’Onofrio) who is needy, but clearly loves his brother and his family.  Heinous things then happen to the wife and daughter, leaving the father, Paul, in despair.  He is a successful surgeon used to solving medical problems, and when he learns from Detective Raines (Norris) how slowly his investigations are proceeding and how few murders are actually solved, this, coupled with his guilt about not protecting his family, spurs him into action.
Paul begins to educate himself about guns and practices shooting.  But he also has time on his hands and starts wandering the streets and riding buses, hoping he will run into a white van with three men inside (his only clue about the intruders).  He doesn’t see that, but he does see crimes being committed and feels behooved to intervene, which he does in a car jacking and when a young boy is shot in the leg by the “Ice Cream Man.”
His interventions earn him a reputation, which, with his determination in finding the perpetrators in his own case, serves to encourage him in vigilantism.  Now, keep in mind, this is Bruce Willis the actor; he will be imminently successful, will be a perfect shot, and will have the best and biggest guns at his disposal.  What follows is entertaining if you like that kind of story and if you can ignore all the blood and torture that follows.
It’s hard to see what the purpose is in movies like Death Wish, which glorify guns and vigilante heroism, beyond that of supporting the National Rifle Association (NRA), which probably helped finance this film.  While the deaths that Paul wreaks seem justified in the heat and emotion of the moment, it sets a bad precedent for execution without the benefit of trial by jury.
Films such as this are troubling to me, especially when I hear audience reactions (like chuckles and laughs) that clearly indicate so many do not comprehend the enormity of the gun issue.  This is not “light entertainment”, nor should it be.  The only redeemable aspect of this film is that the acting is very good.

This is a bad model for anyone to follow, even if you think you can be as successful a vigilante as a Bruce Willis character.