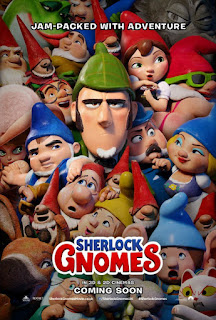 With all the adult themes (such as the complexities in relationships, literary references, and details in the plot), it’s hard to see how Sherlock Gnomes is a film for children, despite its being animated.  Following Sherlock’s (Depp) reasoning through problems and clues is way over the kids’ heads; observing the intricacies of relationships between Sherlock and Watson (Ejiofor), Gnomeo (McAvoy) and Juliet (Blunt), and others would not interest them, if they “got it” at all; and Watson’s counseling Gnomeo about his conflicts with Juliet seems ludicrous in this context.  After the screening, I asked a family in the elevator if they understood it, and all three of them shook their heads and looked disappointed.
It may be another case (now common in children’s films) of the Director John Stevenson and his writers and producers making the common mistake of trying so hard to appeal to adults, they overlook the children seeing their films—or maybe they just simply don’t know very much about children.  The literary references, such as “Gnomeo, Gnomeo, wherefore art thou?” and the “Hound of the Baskervilles” are purely for adults, as are the songs by Mary J. Blige complaining about an ex-lover and “Love Machine.”
The filmmakers also make the mistake of modeling bad behavior and then having the characters getting insight and apologizing afterwards.  Here, Juliet is rude and overbearing toward Gnomeo, and Sherlock is the same with Watson.  If you want children to learn something, you model good, respectful relationships, not bad ones where apologies are called for later.  And I detest the artificial romantic sequences shown between couples, particularly Nanette (Jensen), a frog, trying to seduce one of the gnomes.
An odd thing about the film is that it seems to be over-compensating for the past slighting of women, because here, Juliet, Irene, and Lady Bluebury (Smith) seem to have the upper hand with their men.  For instance, Juliet is shown to be much stronger and smarter than Gnomeo; Irene gives Sherlock h--- for his behavior in their past relationship, and Lady Bluebury’s husband hardly says a word.  Juliet is absolutely irritating with her constant questions and know-it-all attitude.  I can say it was encouraging, though, to see the interactions between Juliet and Irene, which showed solidarity between two women.
About the only other positive thing I can say about this film is that the slate of actors do a very fine job.  Although the script is woeful, the actors came through with the best they could do.

This appears to be an animated film for adults; however, I don’t think many adults would want to see it.  Children are likely to be mystified.

Posted by donnarcopeland at 10:11 PM