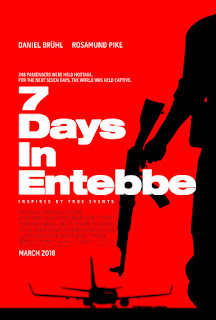 This is a fine account of an event that actually took place in 1976, in which Palestinian revolutionaries hi-jacked an Air France plane with the aim of getting Israel to negotiate with them.  They wanted back Palestinian prisoners that Israel had captured and held, in exchange for the release of Israeli hostages.  The movie illustrates very well the dilemmas that arise from policies about negotiating with terrorists.  There are good arguments on both sides of the issue.  The film goes back and forth between the Palestinian front revolutionaries (two of the main ones are Germans) and the Israeli government officials and—since they ended up in Uganda, Idi Amin finds himself in a position of choosing sides.  Also inserted from time to time is an Israeli dance group performing a number simply to reflect the writhing emotional experiences of all the characters.
Rosamund Pike and Daniel Bruhl give sensitive performances of the two German Palestinian sympathizers, showing their angst—which goes back and forth between them.  She is more hard-nosed and committed than he is most of the time, but toward the end has second thoughts.  In this respect and in their relationships with others, we get a good idea of the terrorist experience and how differently they think and feel from one another, depending on what is happening at the time, and how they both waver between the two sides of their ambivalence.
On the Israeli side Prime Minister Yitzhak Rabin (Ashkenazi) is in conflict with his defense minister, Shimon Peres (Marsan), the former leaning more toward negotiation and the latter decidedly favoring a military operation to rescue the hostages.  Eventually, the vote is put before the cabinet, all favoring the military plan.
Director Jose Padilha and writer Gregory Burke present an engaging story in which I stayed engrossed, and one that seems to maintain good balance between strategy and emotion and human concerns.  The policy of negotiation/non-negotiation is topical—along with the Israeli-Palestinian dispute—both conundrums about which no one seems to have a really good answer.  The filmmakers stayed even-keel on these issues, allowing the viewers to see both sides and make their own judgments.
Very educational!  For me, at least.  I understand a number of previous films have covered this high-jacking incident, (e.g., Victory at Entebbe, Raid on Entebbe, and Operation Thunderbolt), but none was very highly praised.   The criticism of 7 Days in Entebbe as just another remake that didn’t need to be done is likely justified.