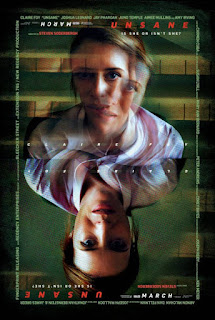 When I like Steven Soderbergh’s work, I really like it (Traffic; Sex, Lies, Videotape; Behind the Candelabra; Logan Lucky) and mostly I like all his work.  However…Unsafe is so far-fetched, with a script devoid of cleverness—just one horror after another—I checked out early on.
We’re given a brief picture of Sawyer (Foy) as a bank clerk cheekily defending her report to a client and told in voice-over about her history of warding off a stalker.  This has left her with some problems to work through, and she goes to see a counselor.  What follows gives mental health care a bad name.  I will allow that its institutions can be criticized, but I seriously doubt any facility would incarcerate someone simply for saying they’d thought about suicide (just about everyone has, at some point in their life), even for the insurance money.  At any rate, this is how the story goes in Unsane (script by relatively inexperienced Jonathan Bernstein and James Greer).
Sawyer is put in with (mostly) insane people, one of which—Violet (Temple)—is particularly confronting and annoying; one of which—Nate (Pharoah)—befriends her and is trustworthy.  It takes time and turmoil before she can contact her mother (Irving) who vows to move heaven and earth to get Sawyer released.  But the psychiatrist (Gibson Frazier) and the administrator (Aimee Mullins) give “reasoned” excuses as to why she must remain.
The problem is the script, which shows a cool, thoughtful bank administrator that Sawyer is lose that cool and suddenly become hysterical, attacking others physically.  Other inconsistencies in character show up later on both in Sawyer and her mother, which I won’t spell out.  Another “trick” employed in horror movies, which these filmmakers have used, is for someone you think is dead to suddenly reappear.  The sudden shift in Sawyer’s personality at the end was particularly off-putting.  Oh, so she’s a b---- after all?
Claire Foy holds this story together with her fine acting skills.  I’m particularly impressed with her American accent after seeing her in British productions like television’s “The Crown” and “Wolf Hall.”   Joshua Leonard as David Strine is just the right amount of creepy, pulling off a professional veneer with underlying psychopathology, and Juno Temple is lovably one of the truly insane.  Amy Irving and Aimee Mullins likewise do a great job as their characters.
Unfortunately, I found this movie so offensive in the aspersions cast on psychiatric hospitalization that it colored my viewing.  Although I know there are valid criticisms of such facilities, I would hate to see unfounded fears about them reinforced, which I think this film does.

Inconsistencies in characters and an unimaginative plot with flaws dooms Unsane (which is not even an accepted word).