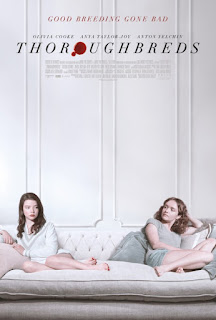 I wouldn’t call the movie “thoroughbred”, but it is entertaining, and a good show for young writer/director Cory Finley.  It will be criticized for being slow, but I thought that pace worked well for contemplating the two teen misfits, Lily (Taylor-Joy) and Amanda (Cooke), and building up the suspense.  Amanda is particularly well drawn as a psychopath-in-the-making, denying she ever has feelings, yet being expert in the perception of others’.
Finley is clever in the way he introduces the two main characters, illustrating their upper class upbringing, one presented as prim and proper and the other as a much more interesting character who surprises with every response.  We are given a heavy-handed tour multiple times of Lily’s house, a richly furnished mansion, to show her upper-class status as well as draw us into the allure of a proposition the two girls make to the local drug dealer, Tim (engagingly played by the late Anton Yelchin in his last filmed movie).  This tour and other scenes are enhanced in the talented hands of cinematographer Lyle Vincent (A Girl Walks Home Alone at Night).
In the beginning, Lily is presented as a good student who has been engaged to tutor Amanda, although this is made ambiguous as to whether there are tutoring sessions or just “hanging out.”  The girls are antagonistic to one another, but something in the other also attracts them.  (We find out later how this is not a good thing.)  Lily appears to be prim and inhibited, and Amanda draws her out by surmising her underlying negative feelings, making Lily uncomfortable, yet realizing that Amanda is astute.  Apparently, Amanda is onto something in Lily’s relationship with her stepfather Mark (Sparks).
The girls do develop a bond, and engage Tim in a devious plan.  After rather abusive negotiations and a tempting offer, Tim agrees to help them.  Thereafter, nothing much occurs as expected, at least by the girls.  Finley as the writer develops a clever way for all of this to play out, but can be faulted for throwing in a red herring.  Although he does an excellent job in showing how two people can egg one another on, the twist at the end does not ring true/plausible.
The acting jobs of Taylor-Joy and especially Cooke are spot-on.  Seldom is an actor asked to be so deadpan for her character as Cooke is, yet she pulls it off with eloquent charm.  Much of the change in Taylor-Joy’s character is shown on the actress’ face and in her eyes.  We see it, but don’t want to believe in what we see.  Paul Sparks is a talented actor, and shows the stepfather to be an a-hole, but he’s more rude than evil.  I think the script should have called for him to more than just rude.  As the film stands, it implies that the girls are “born evil”, instead of responding to their upbringing.

A crime story with a bent different from most.