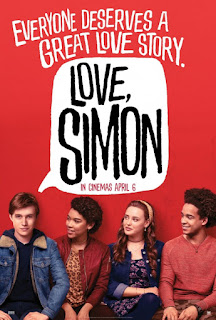 Unlike many films about teens, Love, Simon is mostly a realistic portrayal, with occasional gems of wisdom about how people in general think, act, and feel.  Simon (Robinson) is an appealing teenager with good friends, a wholesome family life, and enough talent to stand out in a crowd.  He has been brought up well, and only occasionally displays the sulk American adolescents are known for.  But, he is coming to the realization that he is attracted to boys and doesn’t quite know what to do about it.
Enter a clueless wannabe Martin (Miller), who gains access to Simon’s personal information and proceeds to blackmail Simon, manipulating him to get a girl for Martin.  This will be matchmaking hell for Simon, but he is naïve and thinks he can pull it off—just to keep his secret, secret.
Added to this scenario, are pictures of high school in general—hallway encounters, the cafeteria, the school play, and parties.  Based on a book by Becky Albertalli, a clinical psychologist whose experience includes a specialty in children and teens and work in a high school, it comes across as plausible and a perceptive understanding of life in that realm.  Screenwriters Elizabeth Berger and Isaac Aptaker seem to have preserved many of the basic ideas, although I have a hunch that some scenes/characters were add-ons, such as the goofus vice principal (parody of a fool) and the sweet reveal and tie-up-with-a-bow ending.
The director, Greg Berlanti, and screenwriters have a background in producing and writing for television, and in some ways, Love, Simon resembles a television program or series more than a feature film.  That is a way of saying that the story is delightfully entertaining, although it has “bite” as well in its observations about teens and high school life and the profound experience of facing/establishing one’s identity.  A special treat is seeing Simon trying to identify his anonymous correspondent on social media.  He makes the same mistakes that many of us have in trying to decide whether an acquaintance or friend is gay.
Nick Robinson is well cast as Simon, with just the right balance of naïveté, trust, skepticism, and doubt in a coming-of-age teenager.  With his success in The Kings of Summer, he should have a bright future.  Other standouts among the teens are Katherine Langford as Leah, Simon’s life-long friend; Alexandra Shipp, the precocious sex symbol; and Logan Miller as the cringe-worthy budding sociopath.  Jennifer Garner and Josh Duhamel handle the not particularly challenging roles of mother and father to Simon.
This is a film that will appeal to those interested in expanding their tolerance and understanding of alternative identities that go beyond simply male and female.

A budding romance a little outside the norm.

Posted by donnarcopeland at 8:07 AM