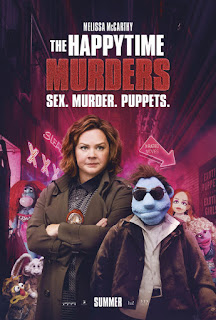 The title refers to a group from a failed sitcom called the “Happytime Gang” (puppets) who are getting killed off one by one.  Disgraced ex-cop/now private detective Phil Philips (Barretta) is assigned with his partner Detective Connie Edwards (McCarthy) to find the killer (just the first in a plot made up of nonsensical actions).  What follows is a series of charades in which Phil happens on the scene just before or after each tragedy, so that he always looks guilty, and is finally the one charged with the murders.
It’s a long time, though, before the crimes get solved, and in the interim, the audience is “treated” (treated?) to all kinds of shenanigans, most involving Philips and Edwards insulting and fighting one another, alternating with pal-sy buddy cop intervals.  Discrimination is highlighted in puppets being disparaged by humans at every turn, but, unfortunately, the filmmakers fail to relate this to any meaningful observation of today’s world.
The movie is based on the premise that audiences will just love foul language in almost every sentence and scene after scene of all kinds of sexual perversions. For those of us not reveling in such “humor”, however, it is a pain to sit through.  Cleverness is alien to the writers (Todd Berger and Dee Austin Robertson), and instead they insert vulgarities to get titters from the viewers.  An example:  “If I’m a-gonna get next to it, I’m a-gonna f… it”, spoken by Sandra White (Davies), who has come to Phil, asking for his help.  Of course, he succumbs to her “charms”, in still one more crude, vulgar sequence.
Melissa McCarthy, one of the main draws for the film, plays the same character she has played in almost every film she’s been in.  Elizabeth Banks is hardly seen in the film at all, and Maya Rudolph—drawing on the Saturday Night Live experience presumably—does come across as a character at least mildly funny.   (She is better than the script written for her.)  Bill Barretta as Phil Philips plays his role well, too, putting his signature on a detective’s narrative that engages and explains.
There is not much else I can say about this film, which seems to be a failure from conception to execution.  Perhaps it makes a case for taking puppets more seriously, but as rendered, it doesn’t make the grade.  Directed by the son of Jim Henson (of Sesame Street fame), Brian, it sadly does not live up to the father’s accomplishments.

Posted by donnarcopeland at 2:39 PM