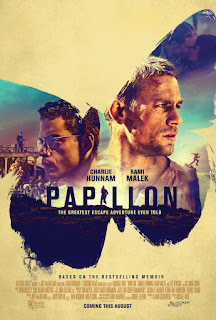 Papillon the character isn’t like a butterfly at all (the name comes from a tattoo on the real Papillon’s chest); he is strong as an ox and has a stubborn sense of purpose that no amount of torture can break.  Henri Charrière (nicknamed Papillon), a thief, has been framed for murder, and is sent to prison in French Guiana.  He immediately begins planning for his escape, and wisely offers protection from the other inmates to bespectacled Louis Dega (Malek), a refined counterfeiter whom he has rightly guessed is not likely to survive prison, AND he has money.  Papillon makes his offer in exchange for Dega helping plan (and fund) their escape.
What will follow are infractions and at least four attempted escapes by the two men with various others.  They are always caught, and swift punishments ensue.  From the beginning, they had been told by the well-fed warden in a white suit that “keeping you is no gain; losing you is no loss.”  This is announced in the courtyard with a guillotine clearly visible for those who commit murder; solitary confinement is for lesser violations like trying to escape.
Papillon will undergo severe punishments, including two years of solitary confinement, then total darkness and half rations because he refuses to give up the name of the person who had sneaked into him a coconut every day for a while. Demonstrating his pluck—as he often does—Papillon insolently thwarts every attempt to make him turn. (He would be turning in his new-found comrade, Dega.)
Papillon is beautifully filmed (Hagen Bogdanski) and scored (David Buckley), which helps offset the repetitious brutality and frustration of repeated escape-capture-punishment sequences.  Another compensation involves following the quirky relationship that develops between Papillon and Dega.  Both actors skillfully pull you in because they are so good, but also because their characters’ connection is nuanced, with Dega being ambivalent in the beginning, Papillon struggling with Dega’s dependency, but then ultimately feeling genuinely responsible for him.  (There is honor among thieves, apparently, and these two seem to develop a deep, long-lasting bond.)  Director Michael Noer has orchestrated well all the components to make this a worthwhile film to see.
It’s a lesson in fortitude certainly, but with principles as well.  At times, Dega ribs Papillon about being the son of two schoolteachers, but although they weren’t able to keep him totally honest, they did teach him two important principles:  Don’t kill, and don’t leave anyone behind.  As Dega says in the preview of the movie, “That man risked his life for me.”
This film—as well as its 1973 production—is based on the 1969 autobiography by Henri Charrière, some events of which have been questioned.  The general consensus seems to be that 75% of the book is true (according to the author), and that much of the content derives from other prisoners’ accounts.  At any rate, this Papillon is provocative, and although it may be better (partly because of new technology) than its 1973 sister, there is still a question about why/whether a remake was necessary or desirable.

At base, Papillon is a lesson in principled fortitude, showing heroism even among (some of) the incarcerated. It’s a fascinating account that holds you captive.