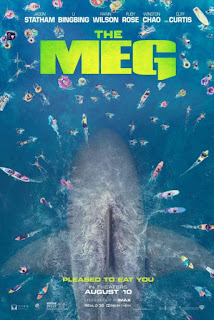 The Meg has a lot going for it:  thrills, intrigue, humor, and fairly good character development.  It opens with a rescue mission that ends up with wins and losses, and Jones Taylor (Statham) being faulted for his role in it.  Five years later, the setting changes to a research station off China, run by Dr. Zhang  (Chao) and his daughter Suyin (Li).  They’ve made an amazing discovery that the floor of the ocean is deeper than previously thought, and they want to explore the boundary between our world and the one they hypothesize lies beyond.  Newly arrived to inspect the operation is its funder, billionaire Morris (Wilson).  He is impressed with what he finds and is gung-ho to proceed.
The research group makes its initial voyage, and do seem to find something major that will be the find of centuries—a whole different ecological environment containing different species from our own.  But…they encounter something huge that rocks their water vessels violently.  They will soon discover that the entry they used to get to the new discovery has been used by a huge shark, a megadon believed to be extinct, to enter our system.
The rest of the story involves the threats posed by the animal and the team’s efforts to survive it and protect the rest of the world from its destructiveness. Within this context, a number of personal relationships complicate the story and provide interest beyond the adventure.  Some of the crew were in the previous mission with Jones Taylor, and still hold a grudge. One is a physician, and one is Taylor’s ex-wife.  In the current emergency, they all agree with Dr. Zhang that Jones is essential to the operation.  He will need to be persuaded to come, however, and if he does, interpersonal conflicts will have to be dealt with.
While these “human interest” vignettes make the film more appealing, some have clearly been inserted simply for that purpose, and this is obvious.  One example is Suyin’s daughter who is present on the research station.  Her interactions with Jones especially have a false quality, particularly when her lines are not plausible “child-speak.”  Another is a romance sparked in the midst of disasters, which is OK, but once again, a little forced.
Jason Statham nails his role as a hero bordering on super-hero on the one hand and a kind of charm on the other, even though mostly he is sardonic.  This is where the screenwriters have done a good job in developing his and some of the other characters into believable figures.  For instance, the Suyin character is interesting in her assertiveness and self-confidence, something not usually shown in Hollywood’s female characters.  But Li gives her spark and appeal so well she captivates.  Rainn Wilson is miscast in my opinion; I never could see him as a billionaire sponsor.
The main “beef” I have with the film is that it extends the story too long, simply to add on special effects and more and more disasters and near-fatalities.  It could easily have ended after the first encounter with the megadon, rather than wearying us with additional emergencies.

A gripping tale that excites and captivates—up to a certain point.