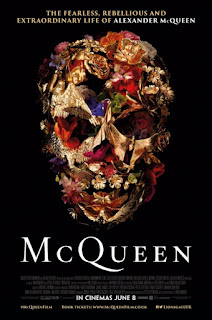 Fashion designer Lee Alexander McQueen’s creations were eloquent expressions of the man himself; outrageously beautiful on the one side, horrifically graphic on the other, and playful delights on still another.  According to this fine documentary by director Ian Bonhote and his co-director and writer Peter Ettedgui, these creations grew out of his complex personality and the way McQueen lived his life; he and his art were one.
In view of this, his early life in London is rather unexpected in its commonness—his father was a taxi driver, his mother a social science teacher.  Her influence on him is clear by her encouragement and full faith in his being capable of achieving anything he wanted. He wasn’t a very good student, because early on he showed a passion for drawing clothing designs and little else. He continued to show aptitude during an internship on Savile Row, was always an eager learner, and quickly and confidently moved up through the ranks of getting a master’s degree in fashion design and having his entire graduation collection bought by Isabella Blow, renowned fashion stylist, who would subsequently become his mentor and close friend.
McQueen developed a reputation for controversy, reveling in shocking the public with his designs.  Early on, he talks about going “to the dark side to pull these horrors out of my skull and put them on the catwalk.”  This was an evolvement from his student days when he was industrious and compliant, soaking up everything his teachers offered.  But his work was so impressive and advanced at all stages of his career, he was always immediately picked up by employers who recognized his genius.
The film includes film clips of McQueen, and interviews with his family, friends and acquaintances, and those who worked for/with him, some for many years. It’s divided into five sections, tracing high points of his collections:  “Jack the Ripper Stalks his Victims”, “The Highland Rape”, “It’s a Jungle out There”, “Voss”, and :Plato’s Atlantis”, which was his final show.  His runway shows were full-fledged entertainment productions with themes and elaborate props. One that was noteworthy had a model in a bouffant white dress rotating on a flat carousel while robots on either side sprayed paint on her dress and herself—an example of his delight in combining technology with his art.
Givenchy appointed him artistic director where he served for many years, and later, Gucci offered to partner with him and his company, in which he was the creative director.  Gradually he worked up to creating 14 collections a year, dividing his time between Paris and his London company, “Alexander McQueen.”  He won British designer of the year four times, as well as other awards.
As time went on and McQueen was pressed for more and more productions, he turned to alcohol and drugs.  As an artist, he tended to be rather labile with a short attention span anyway, but in the later years, he became more aggressive, angry, and suspicious. He had maintained a close bond with his mother the whole time, and her death was especially hard for him, along with his becoming HIV+.  He announced his plans for suicide, saying, “I wanna get off [the roller coaster].”  On the eve of his mother’s funeral, he hanged himself.
The documentary is visually beautiful as envisioned by the directors and realized by cinematographer Will Pugh.  Michael Nyman’s musical score complements their work and adds to the artistic display.

An engaging account of the stunning life and career of artistic genius in fashion design Lee Alexander McQueen in all his glory and pathos.

Posted by donnarcopeland at 5:21 PM