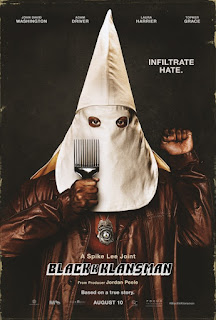 Spike Lee has given us a chilling, eloquent picture about race relations in America, based on an autobiographical account by Ron Stallworth, a former police officer in Colorado Springs, Colorado, who led an undercover operation to infiltrate the Ku Klux Klan in the 1970’s.  It plays like a suspense-filled thriller, with the viewer sweating through many scenes where it is uncertain whether cover will be blown and whether characters will be killed.
Ron Stallworth (adeptly played by Washington) is the first black police officer in Colorado Springs; to be a policeman was always his dream—particularly if he could be an undercover agent.  His first assignment is as a records clerk, which he loathes; then the opportunity comes to cover a speech by a controversial figure at a local campus, Stokely Carmichael, who has changed his name to Kwami Ture, a name that sticks in the throats of the law enforcement community.  Ron does such a good job, he is assigned to the intelligence service when he comes up with a plan to go undercover in the just-forming Ku Klux Klan in Colorado Springs.
After answering an ad for recruiting members for the local KKK by telephone, he convinces his police captain to send in a white police officer, Flip Zimmerman (Driver), to pose as “Ron Stallworth” and learn what the Klan is up to in the area. Stallworth actually calls David Duke (Grace), “Grand Wizard” of the Klan, to expedite his membership card. Duke is so impressed with Stallworth, he goes to Colorado to induct him personally into the Klan.
In addition to the tension surrounding the undercover operation and maintaining anonymity, there is also conflict in the romantic relationship Ron has rather naively formed with one of the black protestors, Patrice (Harrier), who looks exactly like Angela Davis, and who is constantly trying to find out who he really is. There is also the Klansman Felix (spookily played by Paakonen) who is suspicious of Flip, (he thinks he has spotted him as a Jew) and performs tests of his identity and commitment. We’re also on edge, waiting to see if any of the threats picked up by the police department and the FBI(?) will come to fruition.
BlacKkKlansman will most likely come to be considered as Spike Lee’s best film so far.  It won the Gran Prix at Cannes this year, and Lee received a standing ovation at its premier.       This seems well deserved in consideration of the overall production including screenplay, direction, actors, music, and cinematography—and its topical relevance.  One of the jewels is the juxtaposition of a Klan meeting showing a disgusting racist film and a black protest meeting, in which an account delivered by Harry Belefonte tells about the horrific mistreatment of a black child.
As stunning as the film is, it is long; and there are a few scenes that could have been shortened, and one at the end that could have been cut altogether; it’s a telephone call informing a major character about the law enforcement subterfuge.  Perhaps this actually occurred (I have not read Stallworth’s book), but it looks more like the filmmakers simply wanted to vent their spleen.

BlacKkKlansman is a meritorious addition to the films that are making statements about us that we should take seriously.