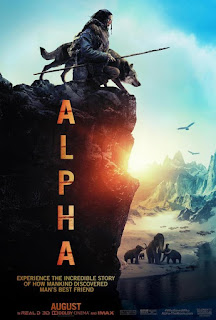 Although they didn’t have “wilderness” experiences in the Ice Age, in this movie, Keda (Smit-McPhee) does go through one in spades back in that time. Keda is the son of a proud chief of a Cro-Magnon tribe, Tau  (Johannesson), who makes it clear what his expectations are of Keda.  The young man must be strong and prove his worth to the tribe.  Keda’s mother (Malthe) takes issue with this, worrying about him going on a trial hunt with his father.  “He might die; he leads with his heart, not his spear”, she says.  But, of course, it’s doubtful such concerns would be paid attention to in their culture.  And besides, Tau has faith in his son, telling his mother that Keda is stronger than she thinks—even stronger than Keda himself thinks. (In an interesting storytelling twist, both prophecies will come true.)
In tests before and during the hunt, Keda has a poor showing—except maybe for sharpening his knife—but his fire-building skill is lacking, and he absolutely fails when called upon to use his knife on an animal.  To his credit, Tau is patient with him and continues to teach him things he needs to know.  Unfortunately, a tragedy occurs, and Keda is left for dead by his tribe, much to his father’s overwhelming regret and grief—not to mention what he will face when he gets home.
What follows are Keda’s personal trials in the wilderness by himself.  He is injured, he has to face the elements and wild animals, and somehow get food and shelter.  The most charming part of the story is about how he makes friends with a wolf he names “Alpha.”  (This is where the “heart” his mother talked about comes in.)  It’s touch and go as to whether he will be able to survive, especially through the winter.
This film misses the mark in so many ways.  First of all, the script based on director Albert Hughes’ story and written for the screen by Daniele Sebastian Wiedenhaupt, is completely improbable. There is no way a young man could have survived what Keda does without any more personal resources than he has. He somehow manages to climb up/around/over a cliff after he has fallen to a place where his father and the tribe couldn’t reach him—this with an injured foot.  With this injured foot, he manages to outrun a pack of wolves.  Really?  It was good to see he made progress in learning how to start a fire, and somehow he caught a rabbit for food; but that he might survive the storms of winter with his now trusted wolf that he has saved and made friends with, strains credibility.
The ultimate challenge in watching this film was a screwed-up 3-D picture that was so dark it was difficult to see what was going on.  Studios that want their films seen in the best possible light should make sure their pictures are seen in optimal conditions.

The intriguing set-up for this film about a boy in the Ice Age proving his worth is so improbable, it’s dis-engaging.

Posted by donnarcopeland at 8:15 AM