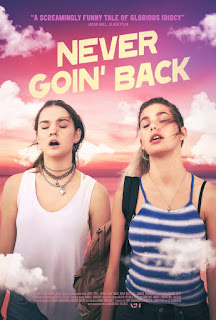 Never goin’ back?  I wish I’d never gone to this movie in the first place.  Think of every motif filmmakers use to transmit grossness—farts, poop, vomit—every silliness and foolishness in ideas and behavior—every cockamamie scheme ever cooked up—well, folks, it’s all here in this mish mash of a conglomeration about young adult misfits.  Other than the set-up of Angela (Mitchell) and Jessie (Morrone) fantasizing about going to Galveston for a holiday, there is no real plot; there are only scenes strung together in which the characters argue loudly (incessantly) and come up with harebrained illegal ways to get themselves out of one jam into another.
The filmmakers’ (e.g., writer/director/editor Augustine Frizzell, editor Courtney Ware) lack of experience is evident, and I have to wonder what possessed the producers and whatever underwriters there were to approve it.  What is its point?  It doesn’t really have a story—just offensive vignettes—no characters show learning and transformation, and no lines are really funny. There are occasional reasons to gasp when you see what is immediately ahead, but the story actually has no suspense, and it’s obvious how everything is going to turn out in the end.
It is the case that the two leads, Mitchell and Morrone, are well cast, and the best scenes in the film are when they are together dreaming their dreams, planning ahead, and just being goofy.  It’s when they or (heaven forbid!) the guys Dustin, Cedric, and Ryan (Allen, Abraham, Holcomb, respectively) try to cook up plans for easy money that the movie sinks (and, frankly, becomes offensive).  I was sympathetic with the character Brandon (very well played by Mooney), who is the only one capable of keeping a job and having some sense of the real world.  His negotiating a deal with the two girls is one of the few scenes that connote tenderness and sincerity.  Brandon provides some sense of reality in the story, whereas interchanges such as the one of a bigot in a grocery store yelling at Angela and Jessie and their yelling right back are ludicrous and not funny at all.
Never Goin’ Back is a movie worth skipping.

This movie is no more than a bunch of foolishness with zero entertainment value.

Posted by donnarcopeland at 9:51 AM