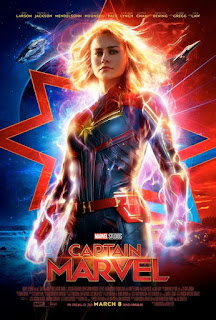 This female Captain Marvel lights up the screen—literally, in brilliant bursts of light—and in her noble beliefs in truth and justice and her aim to be a bridge between Earth and space.
The story opens with her/Carol Danvers (Larson) as a former U.S. Air Force fighter pilot suffering from unexplained amnesia when Yom-Rogg (Law), member of the notable Kree military group known as Starforce, rescues her after a plane crash.  He gives her some information (leaving out significant bits), and informs her that he will be training her to be a Kree warrior subsequent to her DNA being fused with that of a Kree during the accident.  This has given her superhuman strength and other super powers, such as photon blasts from her hands.  He puts her through rigorous fight maneuvers, attempting to train her away from her human emotional reactions to become more like the unemotional Kree.  The Krees are in the midst of a war with another alien group, the Skrulls.
When “Vers”—the name she is to go by—is ready for her first mission, she is visited by the Krees’ Supreme Intelligence (Bening), who tells her she is ready to be a warrior, gives her instructions and then disappears.  At this point, she can’t really recall her own history.
In her mission, Vers will encounter the bewildering, green-skinned Skrull shape shifters led by  Talos (Mendelssohn) to keep them from stealing a light speed engine invented by the Krees and banish them from the universe.  It gets complicated because the characters and the viewers cannot always tell who is really who they say they are, which also provides the opportunity for humorous scenes in which characters are asking one another factual bits and incidents in their past that a shape shifter wouldn’t know. It also means that who are the “good” guys and who are the “bad” guys frequently shifts.  Since the viewer is in the dark too (unless well informed about Marvel comics), this becomes a teaser in the film, which may capture your interest or seem tedious.
Brie Larson in a completely new role for her has just the right mixture of sassiness, bravado, playfulness, and fierceness to be convincing as an action figure, Captain America.  It was fun seeing a woman in that role, like it was with Gal Gadot in Wonder Woman, although Captain Marvel doesn’t seem as bad-ass as Wonder Woman.  Jude Law, Samuel L. Jackson, and Annette Bening are all comfortable in complex roles where their characters are seen in different lights at different times.  The arc of Gemma Chan’s role as Minn-erva, Carol Danvers’ best friend/sister, and an ace pilot is gratifying to see.
Boden/Fleck as writers/directors (and their co-writers) can be pleased with their new Captain Marvel, which entertains, is well paced, and sustains suspense with brilliant special effects, music (Pinar Toprak), and cinematography (Ben Davis) that complement the story and the characters.

The emergence of a female Captain Marvel and the war between two alien groups make for an exciting, colorful ride, with a revealing twist toward the end.

Posted by donnarcopeland at 7:52 PM