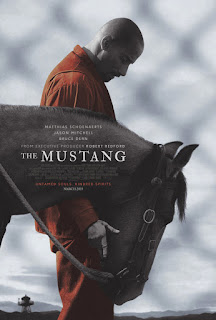 This is Director Laure de Clermont-Tonnerre’s first feature film, co-written with Mona Fastvold and Brock Norman Brock.  She has had a long acting career (including being in The Diving Bell and the Butterfly), and after she became interested in animal therapy for prisoners, she visited prisons and attended film laboratories at Sundance for advice and consultation in making the film.  This was not only to understand the process of the therapy, but also to see first-hand actual prisoners who are incarcerated.
Cinematography by Ruben Impers (Beautiful Boy) is impressive right away in landscape shots of wild mustang horses on the prairie being herded by a helicopter into prison corrals where they will be tamed by prisoners.  It’s meant to be a dual process of both the horse and the prisoner learning how to contain negative emotions and express positive ones.  The latter is demonstrated so beautifully in one tender moment between Roman Coleman (Schoenaerts) and his horse Marcus after numerous out-of-control scenes.
When we first meet Roman he is almost entirely non-communicative; he’s been in prison 12 years, in and out of isolation, and after some sessions with the psychologist (Britton), he is assigned to an “outdoor maintenance program”—literally shoveling horse s---.  Advocating for himself is completely foreign to him.  While working at that job, he keeps noticing a mustang kicking against the enclosure it’s in (no doubt expressing what he himself feels), he walks over and begins to bond with the horse.  When the chief trainer (Dern) observes this (he’s already had a few hostile encounters with Roman), he decides that this man and this horse are meant to be a pair, and suddenly Roman is in animal therapy.
Parallel story lines help maintain fascination and suspense in the prison setting related to one of the trainers (Henry played by Mitchell), an affable black man who is successful in undercutting some of Roman’s hostility with gentle teasing, and Roman’s roommate, Dan (Stewart).  These are woven together well with the main story line, adding depth and scope to the tale.
I liked pacing in The Mustang in giving the viewer time to get to know the characters and absorb the import of it, but revving up the tension and excitement from time to time, keeping you on the edge of your seat.  It is also a film that can be instructive in showing the commonalities between humans and animals and demonstrating the effectiveness of rehabilitative therapy training/for both. One tiny drawback that I saw was the filmmakers not showing the inevitable pain prisoners experience when they must inevitably part.  This is shown to some extent, but not as much as (to me) it is warranted.

An uplifting and inspiring film for just about everyone, with a powerful performance by Schoenaerts.

Posted by donnarcopeland at 9:23 AM