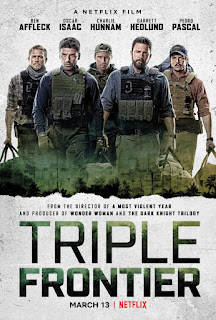 It’s curious how this movie directed by J. D. Chandor (Most Violent Year, Margin Call, All is Lost) and written by Mark Boal (Hurt Locker, Zero Dark 30, Detroit) with Chandor as co-writer could have such a flawed plot.  The story is about retired special-forces operatives who are brought together around a scheme to get their hands on millions of dollars. The actors are top-notch, but the script has the characters making one mistake after another.  They are retired, but that doesn’t cause a person to lose professional judgment and common sense.
The set-up has potential.  “Santiago” (Isaac) has been living in a tri-border area in South America and learns of a drug lord whose house serves as a virtual safe to guard his money. Santiago has a strong code of ethics, which is the reason he is where he is, helping the police.  But he is discouraged when he realizes he has had little effect on the local community.  (BTW, The Triple Frontier refers to a tri-border area along the junction of Paraguay, Argentina and Brazil, where the Iguazú and Paraná rivers converge. Wikipedia)
He comes up with an idea that would require the help of three of his old colleagues and the brother of one, who is a professional fighter.  He goes to visit each one with his proposal. The previous captain of their team, “Redfly” (Affleck), has split up with his wife and has two daughters who need to go to college, but he is an unsuccessful real estate agent, and wonders how he can swing it.  “Ironhead (Hunnam) and “Catfish” (Pascal) are in similar circumstances—none seem to have managed to make their pensions sufficient for their needs. Ironhead seems satisfied with his job as a military instructor, and he shows fondness for his brother (Ben, played by Hedlund), the fighter, who is asked to come along on the venture as well.
Santiago has learned from his close friend Yovanna (Arjona) about the drug lord’s habits, because she is his trusted employee.  The retired operatives carefully plan a heist in which no one but the criminal will be killed.  They think they have thought of everything; but they haven’t, of course, taken into account some of their own personality characteristics and unexpected events that could occur.
Every man except Santiago is reluctant and ambivalent about going, but in every case rationales can be thought of to justify their going ahead with the plan: Pensions aren’t high enough, they served their country selflessly in danger to their lives, and families are depending on them.
Transportation is arranged, concluding with a boat that will take them out of the country and back toward home.  What could go wrong?
Much can go wrong and does, with the result that what could have been a dashing, exciting adventure becomes frustrating when the esprit de corps that special forces are known for fades very quickly, especially under the leadership of a weak captain.  His major misjudgment in the house results in a chain of disastrous problems.
I always admire Oscar Isaac in a film; when he is on the screen, not only does he have charisma and a certain degree of mystique, but he knows how to convey trust in his moral decisions (e.g., A Most Violent Year), except, of course, when he is a villain (X-Men:  Apocalypse), and he does that well too.  Charlie Hunnam also comes across strong in this film as a numbers guy, but one with a keen sense of ethics and who maintains a close relationship with his brother.  Cinematography by Roman Vasyanov is an artistic aspect of the film to admire; the scenes of the Colombian landscapes and the indigenous families transport you to a faraway land.
All things considered, I’m not sure who will see Triple Frontier in a positive light.  Neither the character Santiago nor the actor Isaac are enough to compensate for flaws in the plot and inconsistencies in the other characters.

Triple Frontier is just too implausible to regard as a well crafted film, although the acting and cinematography are noteworthy.