THE BOY WHO HARNESSED THE WIND 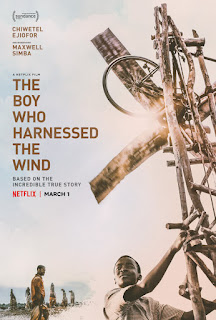 Take a trip to Africa to revel in the scenery, the music, the costumes, and the culture. Talented actor Chiwetel Ejiofor’s first venture in directing a feature film should assure him of a promising future in this aspect of moviemaking.  His selection of story, timing of plot progression, and, in partnership with the producers, assembling a team for casting, music, cinematography, and other artistic components are optimal.
With Ejiofor’s own script based on William Kamkwamba’s memoir with the same title, Dick Pope’s cinematography, Antonio Pinto’s music, Bia Salgado’s costumes, and Alexa L. Fogel’s casting, the viewer is able to experience what it was like in 2001 Malawi when young William was struggling to introduce the windmill to his village.  It was in the middle of a drought when his family and the villagers were suffering in a famine after poor decisions  were made by governments at all levels and by the world economic slump following the 9-1-1 terrorist attack.  And these aren’t the only tragedies in the family story; others involve beatings, stealing, and a runaway teen.
On a lighter note, it’s fun seeing William and his friends rummaging through the scrap yard looking for wires, pipes, wood, and metal without our knowing exactly how he’s going to put it all together.  The hardest to come by are bicycle wheels and other parts, and some of the saddest scenes are when William asks his father if he can have his bicycle, the family’s only transportation.  The father is so incredulous, it’s clear he thinks his son has lost his senses.
I had seen and enjoyed Ben Nabors’ and Tom Rielly’s very fine 2013 documentary, William and the Windmill, but this feature gave me the opportunity to experience William’s discoveries emotionally and learn more about his family and where he grew up.  At least for me, it’s a real tearjerker—in a good way.  One is inspired as much by the child’s fortitude and his family’s struggles as touched by the sadness and tension of his story.
In his first major acting role, Maxwell Simba captures well the child William’s excitement, self-confidence, and ups and downs in trying to cling to his school studies and inveigle ways to carry on independent research in the tiny local library for his project.  His acting skill—likely honed by the director—is especially notable in scenes with the experienced Ejiofor, who plays his father.  The father initially has no faith in his son’s capabilities, calling earlier versions of the windmill model “toys”, and insisting on William’s helping him more in the farm fields.
The film ends on a high note that emphasizes the family’s solidarity and William’s vindication, support from their friends and the townspeople, and a glimpse of William’s life thereafter.
As a follow-up, it’s satisfying to learn that as a result of his invention, William was able to graduate from college, receive funding from venture capitalists, and achieve no small amount of fame.  He has spoken at T.E.D. conferences and appeared on television, and in 2013 was named by Time Magazine as one of 30 People under 30 Changing the World.  He continues his community service by consulting worldwide on projects that explore renewable energy sources, and agricultural, water, and sanitation improvements, along with being involved in providing educational help and resources for students. Most of all, he exemplifies a young man who retains the commitment to community service and assistance for everyone around the world.

The Boy Who Harnessed the Wind will surprise and inspire you, pull on your emotions, and astonish you in witnessing the confident, creative genius of a child.  On Netflix.

Posted by donnarcopeland at 3:38 PM