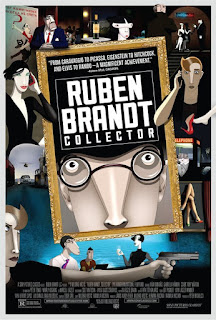 This clever animation will be appreciated more by some than by others.  Informed art lovers will get a kick out of the references to and depiction of famous art works, and the psychologically minded will appreciate the fundamental connections made between nightmares and child-parent issues and patients’ transferences to their therapist. Those viewers might also be intrigued by the coincidental relationship between two opposing characters revealed toward the end.  But it’s also simply fun to watch the masterfully created figures in Ruben Brandt, accompanied by Tibor Cari’s sexy, intriguing score that mixes classical and popular music.  I might want to see it again in the mood of a child watching cartoons on Saturday morning.
Even though the basis underlying the plot is on the absurd side (patients stealing artworks to make their therapist’s nightmares go away), the creatively dynamic animations, colorful characters, and story compensate.  One of the characters, kleptomaniac Mimi, resembles the Pink Panther in her acrobatics and gymnastics; but she is much more attractive and has a taunting, superior air against her rivals.  When the heists are broadcast around the world, the therapist is dubbed “The Collector” because it’s reasoned that since the art works are too famous to be sold anywhere, the thief must be a collector.
In the process of following the criminals lifting world-renowned art pieces from museums like the Tate, the Louvre, the Uffizi, MOMA in New York, and Chicago’s Art Institute, we are privileged to visit major cities in the world, with thrills provided by an art-informed detective Mike Kowalski (Marton) going after the felons in hair-raising car chases.  In addition to Mimi, there is the bodyguard Bye-Bye Joe (Devere), computer-savvy Fernando (Buckholdt), and “professional” bank robber, Membrano Bruno.  Mixing everything up by competing with this crew, is a mobster (Engle)
The fanciful animations are endlessly intriguing, many of them resembling Picasso’s Cubist paintings, for instance, the figures may have multiple eyes not necessarily aligned and abstract body shapes.  Car chases—one involving a forklift raising up a car on a three-lane highway—become scary and comical at the same time.  It’s not perfect; the connections are not always clear, so at times one must just “go with the flow”, trying not try to reason through the action, and simply enjoy the numerous clever references, such as those made to iconic figures like Alfred Hitchcock.  Witty references made by writer/director Milorad Krstic to both fine art and movies make up half the fun.
Krstic, a painter and multimedia artist with formidable knowledge of the arts, has created this fantasy as his first feature film.  He is almost surely up-and-coming, and I expect he will continue to imagine more adult cartoons to please and delight us.  I hope so!  This is a great first start, and I will look forward to seeing his future work.

An entertaining and clever animation for adults.