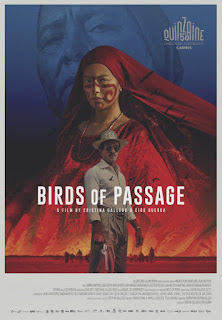 When the drug trade in Colombia began, indigenous people got involved, which marked the beginning of their end in many cases despite their having successfully resisted the Spanish invasion long ago and were never colonized.  Doyens of the tribes attempted to bridge their culture with that of drug trading, but the corruption of money and greed rendered this impossible.
This is a story about that time.  Ursula (Martinez) belongs to the remote Wayuu matrilineal community, which adheres to traditional beliefs, so Ursula has strict requirements for her daughter Zaida’s (Reyes) suitor Rapayet (Acosta) to come up with a huge dowry. He can manage to meet her demands only because he acquires a newly thriving business selling marijuana to Americans, which he gains access to through his assistant Moises (Narvaez), a wheeler-dealer par excellence who not only disregards traditional beliefs, but assumes there is a work-around for any law; and, he is hot-headed and impulsive.
Birds of Passage is as much an anthropological account of the indigenous tribes in Colombia as it is about the drug trade, although the two become intermixed.  Traditional beliefs butt up against the ruthless capitalist drug trade, and who wins is predictable.  But the movie is visually beautiful, the characters are understandable if not always admirable, and the plot is interesting enough to keep the viewer engaged.  It spans over a decade in time (the 1960s-70s), to illustrate the gradual erosion of the family and community, punctuated by periodic crises and violence.  It is also in that period of time when there was a global interest in psychoactive drugs, many of which were processed in Colombia.
Directors Cristina Gallego and Ciro Guerra took care in how the Wayuu people are represented, partly by having natives make up 30% of their crew, who were active consultants in assuring the validity of the characters.  They were also interested in portraying the Colombian drug trade from the perspective of a family rather than from that of drug lords, as in most films about the drug trade.
A standout in her performance as Ursula, Carmina Martinez plays the matriarch in a convincing way, showing authority as well as affection.  Jose Acosta as Rapayet shows well the struggle he has in trying to maintain cultural beliefs amidst the compromised values in the drug trade.  He shows pained sincerity when his friend/assistant gets out of line.

Birds of Passage manages to be a beautiful, educational film, poignantly portraying the inevitable friction that develops when a drug trade encroaches upon a native culture.