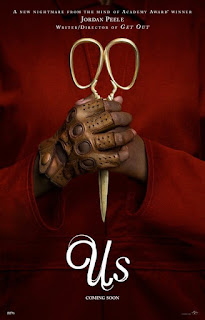 I’m not a horror movie fan (my reality base usually takes me out of the drama), but Us was successful in keeping me engaged—mostly.  Tense moments are right in the beginning when Adelaide (Nyong’o) as a child wanders off at an amusement park and goes into a hall of mirrors.  She is curious and exploring until…she comes to a figure who looks just like her.  She runs out as fast as she can to find her parents, who are beside themselves with worry.  Her trauma is framed as PTSD, and she overhears her parents discussing her with others we don’t know, one of whom suggests she needs to turn to the arts to help her out of the trauma.  And indeed, she becomes a ballet dancer.  Much of the sense of doom here and later on in the film is provided by composer Michael Abels (who also scored Get Out by the same director), whose music will be a profound influence on the way you experience the film.
Years pass, and Adelaide is now married to Gabe (Duke) and they have a daughter Zora (Joseph) and son Jason (Alex).  Gabe is fun loving and seems always to be trying to bring Adelaide along on whatever venture he comes up with.  But she is clearly uptight and fearful.  When Gabe proposes they go to the beach house (which is near the amusement park she visited as a child) with their friends, the Tylers (Moss, Heidecker), who will be nearby, she is equivocal about it, but eventually gives in.
They get to the beach, but when they meet their friends, the Tylers, it’s clear that Gabe feels inferior to Mr. Tyler in his house/car/yacht.  And Adelaide doesn’t relate to Mrs. Tyler, who seems oblivious to Adelaide’s reticence, and barrels on with conversations that hold no interest to Adelaide.  Adelaide’s whole attention is concentrated on her children, especially Jason, who—unbeknownst to Adelaide encounters the same house that Adelaide visited years ago.
Everything is fine until the family goes home to the beach house, when suddenly they see replicas of themselves standing on their front walk.  At first, they don’t realize the four figures look exactly like themselves, and Gabe, doing the father-protection thing, goes out to reason with the intruders.  They don’t respond in the way he expects, so he grabs a baseball bat to go out and confront them again.
Now, from here, you will witness a stream of horrors that will scare you, leave you perplexed, and exasperate you.  At one point, we see someone holding a sign that says Jeremiah 11:11 (which is:  Therefore thus saith the Lord, Behold, I will bring evil upon them, which they shall not be able to escape; and though they shall cry unto me, I will not hearken unto them.” “Is this a prophetic statement?”, you ask yourself.
Unfortunately, toward the end, the story drags and takes you out of heightened alert. Jordan Peele is a master at revving up the suspense and evoking all kinds of associations in the viewer, and most of the time he does that here.  But somehow, towards the end, his message doesn’t come through.
Symbolism is strong throughout, but its meaning is not always clear:  What do “hands across America” (Reagan era) and “It’s our time now” symbolize? Who do the doppelgangers represent?  It is possible to relish the film without bothering to deal with this aspect, however.

A thriller with symbolism for the viewer to figure out.