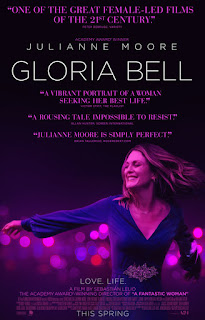 Chilean Sebastian Lelio’s films have been popular in the U.S., particularly Disobedience (2017) about a Lesbian Jewish couple and A Fantastic Woman (2018) about a transgender woman.  Gloria Bell is a remake of his earlier film, Gloria (2013) about a woman past her 40’s trying to develop a satisfying life. Played by Julianne Moore, Gloria looks for someone to share her life with.  Her two grown children, Peter (Cera) and Veronica (Ubach) are caught up in their own lives and clearly enjoy their independence.  Gloria is successful at her job in insurance, and for pleasure goes to dance clubs hoping to connect with a man.
She does connect with Arnold (Turturro) one evening, and they start an intimate relationship that is, unfortunately, punctuated with calls from his two grown daughters needing his assistance.  But to her credit, Gloria is patient and understanding and allows Arnold the space to attend to his family demands.  This is clearly a warning signal, but one she doesn’t attend to.
When Gloria wants to introduce Arnold to her family, particularly to her son and daughter, her ex-husband and his wife are present as well.  When the Bell family gets to reminiscing and showing old pictures, it’s too much for Arnold, and he disappears.  The rest of the story is about whether Gloria and Arnold will make it as a couple.
It’s a “Will they or won’t they?” situation.  This has the potential to be interesting, but several factors keep it in a mundane, rather boring place.  First of all, the main character (much as I love Julianne Moore) captures little interest.  She comes across as lonely and dependent, but, worst of all, lacking any problem-solving skills.  For example, she can’t seem to keep someone else’s cat out of her apartment. I presume this was supposed to be comical, but I didn’t find the humor in it.  And there are numerous other times when her decisions make the viewer shake his/her head.
Secondly, the dialog and action of the story makes you hold your hand over your mouth and yawn.  When the couple of the story meet, their interchange is so stilted and uninteresting you want to leave the dance floor.  Throughout, secrets are kept unnecessarily, and it’s hard to see these people in our present-day culture.
I did see Lelio’s original film Gloria, and was unimpressed then; I had hopes that in this rendition Julianne Moore would change my mind about it, but it’s still a story about a repressed woman who can’t figure out how to get her needs met.  It is so unlike women of today, I couldn’t relate to it.
Julianne Moore does accomplish her usual high level of performance, and John Turturro matches her well.  Michael Cera is striking in his ability to show discomfort in the company of an unintrusive but still annoying mother, and Alanna Ubach is wonderful as the daughter who is the antithesis of both her parents in being excited about exploring new horizons and acting upon it.
This film is only mildly interesting, and is not likely to capture much enthusiasm among today’s audiences.

A woman’s core personality keeps her from living a life she thinks she desires.

Posted by donnarcopeland at 9:51 AM