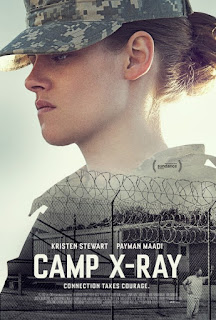 The purpose in making this film is not really clear to me.  It’s about a young female soldier Cole (Kristen Stewart) from a small town in the south suddenly thrown into guarding detainees in Guantanamo.  Hopefully, the real guards get more orientation and training than this recruit gets, because even though she is instructed not to engage with the detainees at all, one (Peyman Moaadi) named Ali hooks her in.  He has a record for being difficult and gives her an initiation (hazing) right away.  Clearly, he is an educated man and is desperate to have some human interaction.  (Is this film intended to show support for the detainees and point out what is bad at Guantanamo?)  Initially, they engage around Harry Potter books, although it’s obvious she has never read any of them, but Ali is an avid fan and eager to read the last of the series.
Naturally, Cole being a woman in the military, it is necessary to show some sexual tension in the film, which takes place in the form of a superior, Ransdell (Lane Garrison), being attracted to her, and when she pushes him away, gets back at her.  She is then reprimanded and transferred to night duty, which, of course, gives much more opportunity for her and Ali to converse and bond.  (Is this film intended to show that women are too weak to be in the military?  The way Cole is portrayed, she does not follow orders for avoiding any engagement with a detainee; whereas her successor, a male, clearly follows the rules.)
What Camp X-Ray ends up showing is that the bond that develops between Cole and Ali ultimately has positive effects on both of them—more so on him than her.  At least, there is an indication that he becomes less rebellious.  (Is this film intended to show support for the FBI’s traditional method of getting information and cooperation from spies, which is superior to torture, which is what the CIA has been known to do?)
This is Director Peter Sattler’s second film to direct; his background in film has usually been in the art department.  I perceive two weaknesses in Camp X-Ray; the first being that the purpose of the film is not made clear.  The second is that Kristen Stewart is miscast.  She does not comport herself as a woman in the military—particularly at a place like Guantanamo—she appears too fragile and ignores her superiors’ instructions.  She usually has a look of mystification on her face.  On the other hand, Peyman Moaadi (Ali), the actor in the Iranian film, The Separation, is perfect for his role as a detainee and he gives a plausible portrayal of someone in that facility.
It also appears to me that the film does a pretty good job in giving us a sense of what Guantanamo looks like on a day-to-day basis.  I was particularly struck by the guards’ duty of having to pace back and forth for a whole shift, peeking into the detainees’ cells mostly, although they do sometimes deliver food and books, and monitor exercise and hygiene.

A look inside the Guantanamo detention facility

Posted by donnarcopeland at 3:57 PM