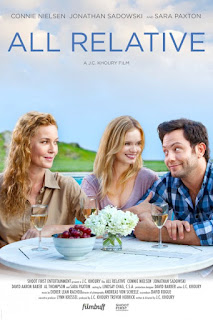 All Relative brings up a very important question about truth.  Is it always best to tell the truth, even when you haven’t been asked a question?  I think the film, directed by J. C. Khoury, deals with this issue reasonably well in the most difficult of circumstances.  The protagonist Harry (Jonathan Sadowski) is recovering from a failed relationship and meets a woman, only at the urging of his buddy Jared (Al Thompson) at the bowling alley and is immediately entranced by Grace (Sara Paxton).  However, it seems that she has quasi-committed to someone else, so he must adjust to their just being friends.  When he is feeling some remorse about it and confiding to a bartender at a bar later, an older woman (Connie Nielsen) offers to buy him a drink and they begin a conversation that ends up being more than that.
Time passes though, and soon he is meeting up with Grace again, thrilled that her commitment with the other man didn’t pan out.  Soon, the two are in the car to visit her parents in Westchester.  He is hoping for an offer from an architectural firm, one of which is one her father Phil (David Aaron Baker) is associated with.  They arrive, and there is a major surprise; however, Phil is very cordial, and seems to take to Harry instantly.  As the weekend progresses, things get more and more uncomfortable, and finally dissembles.
That’s because all the main characters have to deal with something extremely uncomfortable.  The filmmakers do a good job in working things out, nevertheless, although there may be disagreements about how they resolved it.  J. C. Khoury, writer/director, can be praised for bringing this issue up in a film, because I think it is extremely relevant.  We all generally want to adhere to truth, and think that is the best ideal position; but I personally think there are times when it is best not to volunteer the truth.  Is this film an instance of one?
At any rate, the actors (Sadowski, Nielsen, Paxton, Thompson, Baker) perform beautifully, and we can relate to each one of them in turn.

Is it always best to tell the truth, even when you Haven’t been asked a question about it?

Posted by donnarcopeland at 4:42 PM