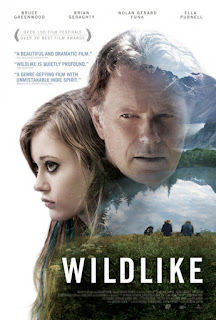 Wildlike is a beautifully filmed first-time feature with an engaging story by writer/director Frank Hall Green.  Set in Alaska among breath-taking wilderness scenes and ice-capped mountains either close up or in the distance, nature becomes an important player in this story, quietly captured by cinematographer Hillary Spera.
I especially like the story, which develops slowly, as the main character Mackenzie (Ella Purnell) is rather mysterious, partly by seldom answering questions put to her.  She is greeted by “Uncle” (Brian Geraghty) at the airport, and taken to his house.  He is friendly and welcoming, and we learn he is the brother of her father who has died.  Only gradually do we learn why she has been sent from Seattle to stay with him.  For a very good reason, after a short time, she instinctively runs away and finds herself in the Alaskan wild.  The story then heightens the viewer’s interest by having unexpected twists and turns.
At one point, Mackenzie’s path crosses that of Rene Bartlett (the oh-so-fine Bruce Greenwood), then follows what I think is one of the more comical aspects of the film, when Mackenzie begins to follow “Bart” as he prefers to be called, almost tropistically.  He tries every way he can think of to shake her, but she inevitably turns up.  He doesn’t talk much more than she does, although we do learn that he is working through a grief reaction, and wants to hike in this part of Alaska for a particular reason.
A touching, highly symbolic sequence occurs when the two hikers encounter people flying kites; these people are very warm and welcoming, and invite them to stay overnight and take a short flight in the morning.  This event and something that occurs a short time later marks a turning point in Bart’s and Mackenzie’s relationship, although the journey is still far from over.  At least now, they have a sense of the possibility of flying and becoming free of their burdens.
The resolution of the story is another aspect that makes it a cut above most; it’s highly intelligent, sensible, and leaves just enough up in the air for the viewer to depart the film feeling inspired.
In addition to the quality of storytelling, Greenwood’s and Purnell’s rendition of their characters and the journey they go on contributes mightily to the quality of Wildlike.  Purnell’s facial expressions are highly controlled, such as the graduated smiles she makes that go from just slight to broad.  Greenwood creates a certain degree of mysteriousness as well, and often conveys much of what he is thinking and feeling just with his eyes or mouth.

A film sure to keep you engaged.

Posted by donnarcopeland at 4:26 PM