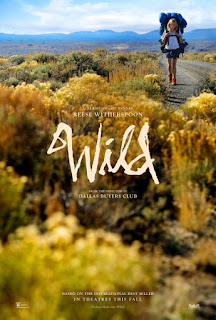 A young woman makes a soul-cleansing journey (1100 miles) to make amends and work through a painful grief by hiking the Pacific Crest Trail from the southern border of California up to the Oregon-Washington border.  Reese Witherspoon is enchanting in playing the role of Cheryl Strayed, who ventures out with little preparation or training, only a set jaw and little, albeit some, trepidation.  In her favor besides her heroic determination are good looks and a winning personality.
Her first challenge is simply loading her gigantic pack and struggling to put it on her back and stand up, which takes several tries.  After she has walked several days, one helpful person helps her go through it and throw out all unnecessary items, and things go better after that.  She has to climb over large rock formations, wade through waist-deep water, and trudge through snow, so lightening it is essential.
What makes the story so engaging are not only her personal struggles, but the many kinds of people Cheryl meets along the trail, some initially threatening, some clearly threatening, many who are clearly helpful, and even a rosy-cheeked curly-headed cherubic boy who wins her heart by being interested in her and eventually singing her a song.  This occurs toward the end of the trail and precipitates an emotional break-through for her.  Canadian director Jean-Marc Vallee (Dallas Buyers Club, C.R.A.Z.Y., The Young Victoria) also hooks the viewer in with his artful way of inserting scenes of Cheryl’s past, which informs about who she is, what she has experienced, and why she is on this journey.  It seems to be a bit of a fad for filmmakers to avoid chronology and jump around in time, which to me is not always successful, but Vallee knows just how to do it so that it adds to the viewer’s experience and keeps the drama moving smoothly.
The film is based on Cheryl Strayed’s memoir, Wild:  From Lost to Found on the Pacific Crest Trailway, and Nick Hornby’s screenplay is a finely crafted adaptation of the book to film.  High drama, beautiful scenes of the Trail, and sprinkles of clever humor add up to a very good movie.  Witherspoon’s performance is one of her best, and the addition of Laura Dern as her mother, Thomas Sadoski as her ex-husband, and colorful characters along the trail make for a well-synchronized enactment of the fine script and direction.  Wild is likely to be mentioned more than once during awards season for 2014 films.

Take a hike.  You’ll enjoy it!

Posted by donnarcopeland at 3:08 PM