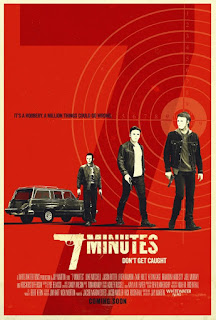 7 Minutes is about a group of high school friends trying to pull off a bank robbery in their small town.  One has just gotten out of prison, but basically they’ve had no experience in pulling off such a job.  Sam (Luke Mitchell) has a pregnant wife and has just been laid off at his work.  He’s trying to make ends meet by selling drugs, which his older brother Mike (Jason Ritter) has gotten him into.  Their friend Owen (Zane Holtz) is the one just released from prison, and his father (Kris Kristofferson), who calls him “Numbnuts” (he clearly has little respect for him) has two bits of advice:  “Don’t go in with anyone who has more to lose than you do” and “Don’t get caught.”
The three friends pick up a drug order from a cold-hearted drug dealer, but get spooked on the way home when they think they’re being spotted by some policemen.  Owen, desperately not wanting to have to go back to prison, dumps the drug down the toilet, and things only go from bad to worse from there.  They are now in debt to the dealer who wouldn’t think twice about killing them, so they cook up the idea of robbing the bank owned by Sam and Mike’s uncle.   Well, their ineptitude is apparent right away when they buy three plain white masks that only hide their faces, leaving their hair and the outline of their heads obvious to those who know them, and it being a small town, the bank owner immediately recognizes Sam and calls him by name.
As happens with small-time operators who are less than discreet, others want a piece of the action, so things go from bad to worse, and there is a bloodbath.
The script by the director Jay Martin contains suspense and fairly well developed characters.  A really unnecessary gimmick (often used by filmmakers nowadays) is to show fragments of the story in jumbled time.  I’m not sure why filmmakers choose this format—perhaps to increase suspense—but I find it annoying.  The viewer has to work that much harder to figure things out.  The actors are well cast, and a clever sub-plot shows Sam’s pregnant wife (Leven Rambin) cleverly outwitting one of the bad guys.

Posted by donnarcopeland at 2:28 PM