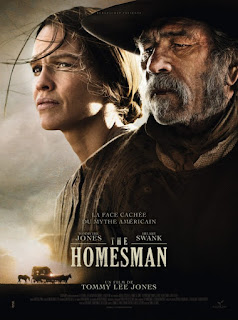 The Homesman is not your typical western movie; it has more to do with human psychology and sociology, and what sometimes happens to those who are under stress and ill-equipped to manage.  Mary Bee Cuddy (Hilary Swank) is apparently not one of these; she farms a homestead on her own, maintains her house, goes to church, does her Christian duty, and plays the piano.  When she doesn’t have a physical piano, she fingers a cloth keyboard and sings.  When three women in the congregation lose their minds, she volunteers to take them east to Iowa so their families can take care of them.  When two women protest that as a woman she should not take on the task, the minister (John Lithgow) says she is “as good a man as any man hereabouts.”
She is nervous about transporting them in a wagon across the prairie, however, and when she comes upon a man (Tommy Lee Jones) hanging from a tree, she agrees to cut him down if he will help her take the women east to their families.  He agrees only out of desperation; he is not ready to die.
The women are indeed psychotic; one has to be tied down because she attacks whoever is in sight.  They seem to have been driven crazy for various reasons, such as losing children to disease, but the film does not always clarify their histories.  We’re introduced to them rapidly in the beginning without much explanation—which I see as a weakness in the exposition.
At any rate, the women are loaded onto a makeshift wagon that can be locked from the outside, and Mary Bee Cuddy and “George Briggs”—a name he decides to call himself—take the reins of the horses and head out.  You can imagine (I actually had a hard time of it) some of the issues they would encounter along the way (a runaway, Indians, snow), let alone hygiene (one of the woman has to be held and told to pee), food preparation, sleeping arrangements, etc.  As expected, Cuddy and Briggs will have major disagreements along the way to establish dominance.  The resolution of their conflicts and the outcome of their destination is one of the perhaps unique and surprising endings of a western genre film.
The Homesman is well directed by Tommy Lee Jones, and the cinematography by Rodrigo Prieto is exquisite.  The main actors (Jones, Swank, Lithgow, Spader, and Streep) are some of the best and shine in their roles.  Jones has a couple of song and dance routines that are totally out of his usual character presentations and are a hoot—although you may not be able to understand the lyrics; it’s enough to watch him dance and shout.    Swank easily conveys Cuddy’s strengths, and is able to elicit sympathy—maybe even pity—from the audience during her times of weakness.  Spader and Streep have only cameo roles, but are powerful in the brief time they are on screen.  The actresses portraying the psychotic women (Grace Gummer, Sonja Richter, and Miranda Otto) capture their distresses perfectly.
The Homesman is not likely to be a film for everyone; I had mixed feelings about it when I left the theater—presumably because of some of the more depressing, hopeless scenes, as well as a rather surprising ending.  In addition, I think one character in particular is not consistent across time with how she is presented initially—not that I’m saying people don’t change, only that how this character is presented in the beginning does not plausibly lead to what happens later.  Not so with Briggs or the psychotic women, all of whose personalities are entirely consistent with their characters throughout.

Not a homespun tale.