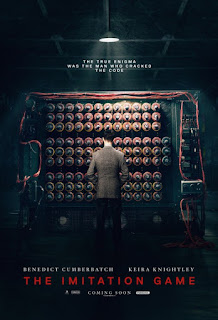 The highly anticipated Imitation Game delivers in both entertainment and educational value.  It tells the story of the breaking of the German Enigma Code during WWII.  Not only does this involve the intrigue of a spy story, it gives an account of all the frustration and roadblocks Alan Turing (Benedict Cumberbatch) had to endure to pull it off.  Norwegian director Morten Tyldum (The Headhunters) is gifted in assimilating related sub-plots into a beautifully crafted, reasoned whole.  Of course, in this respect the novelist Andrew Hodges and screenplay writer Graham Moore, deserve part of the credit.
They tell the story about shy, socially awkward Turing in Great Britain who was fascinated by puzzles, particularly crossword puzzles, from a young age, and became expert at making and deciphering codes.  He was an odd child (perhaps had Asperger Syndrome in the autism spectrum disorders, characterized by difficulties in social interactions and communication, along with compulsive interests and behaviors, but sometimes with brilliance of mind), and suffered from teasing and discrimination all his life.  To make matters worse for him, he was attracted to men.  Despite these drawbacks, he was supremely self-confident in his abilities, and never doubted his success in creating a machine (a prototype of the computer) that would translate Enigma into English.  Also despite his social difficulties, he managed to head up a team of scientists who ended up being loyal to him during critical times when the English government threatened to shut down his operation.
The group included one woman, Joan Clarke (Keira Knightley), who got the job by working a crossword puzzle in record time.  (This was the task Turing used to select his team.)  It also included Hugh Alexander (Matthew Goode), who was in charge of the team before Turing managed to wrest it from him by enlisting Churchill’s support, much to the frustration of not only Alexander, but two superiors, Commander Denniston (Charles Dance) and Stewart Menzies (Mark Strong) as well.
The threats to the operation were unbelievable, and included Joan’s parents thinking her job was inappropriate for a woman and calling her back home, Denniston’s lack of confidence in Turing and his accusations of Turing being a Soviet spy, the insertion of an actual double agent into the team, financial support, and homophobia, just to name some.  While the team was ultimately successful in breaking the Enigma code, it was at a dear cost to Turing personally.
All in all, The Imitation Game is an interesting, exciting, thriller with outstanding performances from Cumberbatch, Knightley, Goode, Dance, and Strong.  The music by Alexander Desplat and cinematography by Oscar Faura give it the boost necessary for a top-notch movie, along with Tyldum’s direction.

Posted by donnarcopeland at 4:14 PM