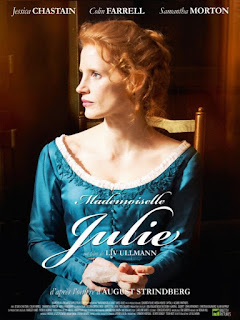 Miss Julie, based on a Strindberg play set in 1890, is meant to be “naturalistic” (realistic, with meaningful conflicts and a minimum of sub-plots), an approach that Strindberg felt strongly about, and which demonstrates his belief in the Darwinian principle of survival of the fittest; here it takes place in the form of a class struggle between the two main characters:  Miss Julie (Jessica Chastain), the daughter of a wealthy baron, and John (Colin Farrell), her father’s valet, who is from a poor background.  Sheltered Julie is curious about, but has no knowledge of, those beneath her station.  On the other hand, John has studied the upper classes all his life and educated himself through books and travel.  Both have lost someone dear early on; his brother died in the same bed as he, and Julie’s mother died when she was young.  She left her daughter a legacy for conflict however; she was taught to hate men; but, on the other hand, be more like a man herself, e.g., wears boots, flirts, barks out commands to her servants, and vies for control in any situation.  Moreover, her mother didn’t particularly like the child, which Julie says left her with a “black hole” inside.  Unbeknownst to Julie, John has loved her from afar since childhood when he would climb the estate fence and gaze upon her as she played in the garden.  She has noticed him now, though, as a young adult, and is attracted to him.  Naïve about social class in some respects, she begs him to dance with her and marvels that he “speaks like what I find in my books.”
John has always been a “ladies man”, so one evening after a day of taunting and flirting, he easily seduces her.  In the 1890’s, that means she is now a fallen woman.  Strindberg now uses her as an example of how the upper classes have become weak and vulnerable, whereas life struggles have strengthened those in John’s circumstances.  The two are very conflicted about perhaps running away together, and each vacillates back and forth about this possibility while wrestling for the power position.  Eventually, he realizes that she cannot “step down” to his level as she suggests at one point.  “No, he counters, “don’t step down; they will say you fell.”  Miss Julie has been very indiscreet about her flirtations with him, and the townspeople are keenly aware of what is going on.  So he comes up with a bitter, harsh solution, and she submits willingly.
There is a third character played by the talented Samantha Morton, who is informally engaged to John; Kathleen provides the Christian religious perspective, which serves as a counter to Darwinism.  She suggests to the two that John should come to Sunday morning services and confess his sins.  She doesn’t concern herself with Miss Julie’s predicament for a number of reasons, and unlike John, she has never aspired to Julie’s station, so doesn’t “see” her, in a sense.  To Kathleen, “Class is class”; one shouldn’t tamper with the existing social order.
The well-known actress in Swedish director Ingmar Bermann films, Liv Ullman, both wrote and directed Miss Julie.  I believe her work brilliantly captures Strindberg’s intent with his play, and she has created a beautiful synthesis of all the elements of filmmaking, specifically in the cast and characters, the music, and cinematography.
The actors, Chastain, Farrell, and Morton have achieved career highs in their performances in Miss Julie.  Each one could be watched simply to see them mold their characters and capture their conflicts in their bodies, movements, and vocal expression.  Chastain and Farrell particularly must show huge vacillations that show the range of their capabilities.
The music by Mike Figgis—perhaps drawn from his own earlier production of Miss Julie—is beautifully rendered and perfectly captures the setting in time.

A classical piece well worth your time.

Posted by donnarcopeland at 2:55 PM