THE BOOK OF HENRY 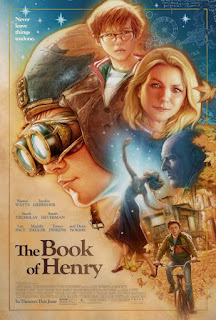 This is a very different version of the single mother bringing up two boys on her own than we usually see—either in real life or in the movies.  Susan (Watts) is unconventional in her being consistently late in picking up her boys from school, whistling to them from the car, playing videogames, and so on; but she is quite conventional in her “good mother” role of warmth and nurturance and being able to play and have fun with her kids—the more important things, really.
Henry (Lieberher, previously in Midnight Special) is a very (unbelievably, maybe?) precocious child who not only knows more facts than most adults, but reasons at an adult level.  In addition, he has a keen sense of fairness and ethical principles.  He’s not obnoxious, though, because he’s so sincere and thoughtful of others.  His younger brother Peter (Tremblay, previously in Room) is a great counterpart in his sweetness, but it’s nice to see his spunk and competitiveness with his older brother.
So this family is tumbling through life, mostly enjoying it, and trying to be helpful to others.  Susan has a co-worker at a coffee shop (Silverman), who clearly needs her support.  Henry has to rescue his brother from bullies at school.  But what puts the intrigue of the story in motion is Henry’s observation of his schoolmate Christina (Ziegler) next door with her stepfather, Mr. Sickleman (Norris), the city’s police commissioner.  From what Henry can glean from his online searches and books, Christina is suffering from abuse.  There has already been an incident in the grocery store observed by Henry and his mother, where a man was being abusive to a woman, and Susan advises Henry not to try to intervene by telling him, “It’s not our business”; it could provoke more violence.  But Henry is not convinced, saying that apathy, not violence, is the worst thing in the world.  He then proceeds to devise a plan whereby Christina can be rescued.
Something happens, and Henry cannot enact his plan, but he has given Susan the most detailed instructions as to how she can see to it that Christina gets the help she needs.  This is the action of the story, filled with suspense, and keeping the audience on edge.
Director Colin Trevorrow (Jurassic World, Safety Not Guaranteed) knows very well how to direct movies with drama that have some thrill to them.  His team of Michael Giacchino (music) and John Schwartzman (cinematographer), along with others, add measurably to the production.
Although the script is very good in terms of entertainment and capturing the imagination, I think Gregg Hurwitz made a mistake in putting adult words and concepts into a child’s role, and making him, in psychology parlance, a “parent child.”  This doesn’t usually work out so well in real life as it does in this film.  The script is also weakened by the gaps in Henry’s story.  I can’t say more, but that was jarring to me.  On the other hand, the insertion of precursors like Susan’s whistle, her penchant for videogames, and Henry’s class report on legacy are clever in their prescience.
Naomi Watts is a solid performer who consistently gets good reviews, and she deserves it as well for her work here.  She’s such a natural in relating to children, and her tremulous standing up to Mr. Sickleman is outstanding.  To be commended are the two boys playing her sons, Jaeden Lieberher and Jacob Tremblay.  They seem to understand intuitively what is called for, and they produce it naturally.  Dean Norris knows very well how to play the villain (“Under the Dome” and other TV series), and his portrayal of the bully and reactions of surprise and concern ripple through his face so tellingly.  I’m not sure why the Silverman character was included; although she played her part very well, the character seemed extraneous to me.
Although I liked The Book of Henry in many ways (directing, music, cinematography, actors, entertainment), there are parts of it that seem over the top.  For instance, I mentioned the portrayal of children.  The most galling was catapulting poor Henry (basically, a wonderful boy) back in the traditional role of a dominant husband over a submissive wife.  “I must tell you exactly what to do and you must follow my instructions implicitly.”  “Pay attention to our finances!  You don’t even know what we are worth.  I’ve made all this money so you don’t have to work any more.”
This movie will be applauded by those taken in by the romantic story that children can be as wise as adults, but don’t you believe it.  Even the writer of this script hedged on that.