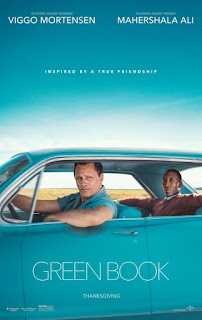 It’s fascinating to see how filmmakers are able to turn stereotypes on their heads so shrewdly and wittily, which can be funny, heartbreaking, or insidious.  Here, the director (Peter Farrelly) and writers (Nick Vallelonga, Brian Hayes Currie, and Farrelly) have woven a tale based on a true story showing how a slightly condescending African-American who is wealthy, mannerly, and educated can somehow bond with a white working class man, a bouncer at the Copacabana in New York, with clear hostilities toward minorities.  In their concert tour, they confront southerners with major prejudices, field workers gawking at a black man in a suit being driven by a white man who has to fix the car, and self-contradicting southern traditionalists who invite a black artist to perform for them, but will not allow him to use their bathroom or eat in their dining room.
Part of the delight of Green Book (referring to a guidebook used by blacks designating restaurants and motels/hotels in the south that would accept them as patrons) is observing how, with the right provocative experiences many can change, even though some will be impervious. And that is the lofty goal of Dr. Don Shirley (Ali), to change the world and make it a better place.  He succeeds beautifully and heartwarmingly with his driver Tony (Mortensen)—as he himself is transformed in the process. And we hope that he leaves change in his wake as he protests with dignity the injustices he encounters on the road.
Another delight is seeing the different perspectives of the two men crashing into one another, usually in the car on the road.  They have pointed conflicts that are only settled by Don being Tony’s boss.  Yet, Tony gets his jabs in from time to time.  Tony is proud of his life-long designation of “Tony Lip”, which came from his reputation at an early age of being a good bullsh*ter. When Don labels it as simply lying, Tony is offended.  He sees it as getting people to do what he wants them to.  And both learn from the conversation as Tony ponders what Don has said and Don along the way sees how Tony’s bulls*ting gets them out of jams.  It expresses in an exquisite way the truth in both their views.
Another beauty of this film is to see the two actors, Mortensen and Ali, at work. They are masters at conveying subtle signs of all kinds of thoughts and emotions.  They have perfect chemistry with one another and will always praise the other’s skills.  They’re not just being polite; both approach their roles in a perfectionist way, wanting most of all to convey accuracy and authenticity.  Ali’s piano playing is a wonder to see, and I was curious to know if he could actually play that well.  It turns out that he had a coach and sometimes double, but the rendition on the screen looks like it is all Ali.
This is a very different Farrelly film from his past collaborations with his brother Bobby (e.g., There’s Something about Mary, Dumb and Dumber, Shallow Hal) in its being more than a comedy, something of a character study, and taking a political point of view with regard to race and class.  He should be proud of the venture in its depth of commentary and essential substance, along with the comedy.  At its most eloquent, Don agonizes, “I’m not black enough, not white enough, not enough of a man—so who am I?”  Stereotypes limit us; diversity frees us.  That’s the message of this film, which won the audience award at the Toronto International Film Festival.
Despite the two-hour run time, I didn’t want the story to end; I wanted to stay with these people.

A wonderful film that moves you, prompts you to ponder, and makes you laugh.