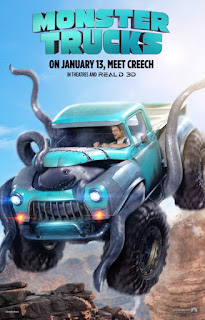 For a completely fantastical (i.e., unrealistic) experience, go see Monster Trucks.  The story is predictable, with a teenage boy named Tripp (Till) taunted by a rude classmate; ignored by his irresponsible father; disdained by his mother’s boyfriend, Sheriff Rick (Pepper); thwarted by evil corporation Terravex headed by Reece Tenneson (Lowe); and pursued by a pretty tutor named Meredith (Levy), a science geek.
When Terravex ignores environmental risks in drilling for oil, observed by one of their scientists, it proceeds to drill anyway, which disturbs the habitat of a species new to science.  One, named “Creature” by Tripp, escapes the company’s creature catcher and makes its appearance at the teen’s job in a wreck yard.  After brief transactions, Tripp decides the creature is smart and friendly, and he makes a friend of it.  It helps that Creature has social sensibilities and is affectionate.  This friend will do amazing things for Tripp, including navigating a monster truck MacGyverred by Tripp from one of the junkyard trucks.
Meredith is trying desperately to have a tutoring session with Tripp, and since she is smart and curious, she tries to help him figure out how to protect Creature and build his longed-for truck at the same time.  She offers scientific facts that are helpful to Tripp and provides a place for him to work undisturbed.  He’s a pretty clueless kid, and is so preoccupied with his project he doesn’t even notice when he starts to fall in love with her in a day or so.
What follows is a series of car chases involving more monsters in trucks pursued by the sheriff (Tripp’s stepfather) and the evil creature catcher.  Powered by Creature, the truck can leap over buildings and trains, go through narrow alleys by making its sides climb partway up the walls, and go for days without sustenance (which is oil, by the way).
There is an inherent contradiction in a story that is supposed to be ecologically sympathetic—that is, that the monsters’ primary food is oil, and the featured trucks are gas-guzzling monsters themselves.  So much for ecology and the preservation of animal habitats.
One of my pet peeves in movies about teenagers is that the actors are frequently too old to be plausible for that age.  It’s a bit ludicrous to see Tripp (played by an actor 26-27 years old) sitting in his old truck acting out scenes of a truck driver shifting gears with all the sound effects of gunning motors, brake screeching, etc.  Actress Jane Levy—his girlfriend—is even older.  There are hundreds of talented teenage actors; so why moviemakers employ 20 and 30 year-olds to be teenagers doesn’t make sense.  Another inconsistency in the story is the abrupt shift in the character of the sheriff from a cold, derisive grown-up with no respect for Tripp in the beginning, to his suddenly being a helpful father figure in the end.  We’re given no explanation for this transition.
The primary flaw in this production is a script (by Derek Connolly and Matthew Robinson) that is nonsensical and not readily identified for any age group.  Although visually it appears to be for very young children, much of the narrative will go over their heads and bore them.  Despite a big budget, the producers and Director Chris Wedge were not able to mold the project into a meaningful, entertaining whole.

Someone thought that trucks powered by monsters to look like monster trucks would be a clever premise.

Posted by donnarcopeland at 12:24 PM