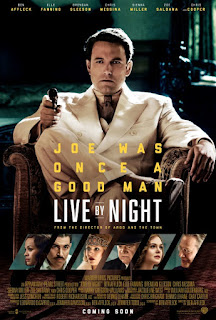 Does crime pay?  Live by Night seems to be addressing this issue, but the reasoning and events used to talk about it are complicated.  Joe (Affleck) is rebellious toward his father (Gleeson), a Boston police captain, and a bit jaded after a stint in the Marines during WWI, saying that he is no longer going to take orders from anyone.  As a reaction to these situations, he chooses a life of crime to support himself, much against his father’s advice, of course.  But the irony is in what he finds when he is caught between two warring crime bosses; father figures ordering him around—in spades.  And he also finds that now the stakes are much higher, and his vow not to kill anyone else becomes increasingly impossible.
Joe is extremely naïve in the beginning of the story, and easily becomes fatefully involved with the girlfriend of the first big boss, Albert White (Glenister).   Emma (Miller) is coquettish and he is easily entangled in her web.  He just about loses his life as a result, but is rescued at the last minute, although he does have to do some time in prison.
Just why he again makes a bad choice when he gets out is not explained—a fault of the writing.  That is, a boy who seemed to come from a “good” family with basic values is somehow attracted to a life of crime?  There is nothing in the script about the character that accounts for this.  But say it’s simply money; he doesn’t know how to make lots of money without participating in the alcohol trade during Prohibition.  Let’s just go with that.
Competing drug lords Albert White (Glenister) and Maso Pescatore (Girone) recognize his skills, and recruit him; first, White, then Pescatore.  He is able to keep from killing when he is with White, but with Pescatore, that option is not open.  Not only must he deal with competition in business, but he eventually has to deal with the Ku Klux Klan in Florida.  The ante keeps increasing for this unfortunate character until he thinks he has finally reached a solution.
Another complication Joe encounters in Florida comes in the form of a sexy Cuban, Graciela (Soldana), who supports pro-Cuba revolutionary causes.  She will be his redemption both emotionally and legally.  At last, he finds through her a path that will free him from his baser instincts.  But there are major twists in the story on up to the end.
Affleck co-wrote, produced, and directed Live by Night, and after his success with Argo and winning numerous awards, this film is something of a disappointment, which has to do with a host of problems.  The main characters are not well fleshed out; the sound quality makes it difficult to understand the dialog sometimes, and the logic of going from Point A to Point B in events as well as the characters is weak or absent.  Affleck’s own performance is thin, not nearly as powerful as much of his earlier work in Gone Girl, Argo, and The Town, for instance.  Perhaps it’s just a matter of time and attention; he has numerous projects in development and in production.
Turning in good performances are Elle Fanning, Brendan Gleeson, Zoe Saldana, Chris Cooper, Ramo Girone, Robert Glenister, and Chris Messina.  Robert Richardson (Hateful Eight World War Z, Django Unchained, Hugo) is a wizard with the camera, and the music of Harry Gregson captures the period.

A gangsta movie for gangsta fans.

Posted by donnarcopeland at 4:38 PM