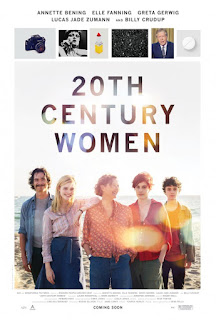 A film about women, yes, but just as much about motherhood.  It’s 1979, and Dorothea (Bening) has tenants and an occasional visitor in her 19th Century house in Santa Barbara.  She has her son Jamie (Zumann), Julie (Fanning) who comes only by night to talk and sleep in Jamie’s bed, Abbie (Gerwig), an artist who’s run away from home and renting a room, and William (Crudup) who has a room in the house but is doing major remodeling of it.  Perhaps without realizing it, Dorothea has created a family with the utmost intention of providing the best she can for her son.  It’s a little bit sad that she has no awareness of her own needs in this regard.
Jamie is a thoughtful child who asks his mother probing questions that, to him, she avoids answering (like, whether she’s happy); and when at one point she asks why he’s not open with her, Jamie retorts that he’s not the one who doesn’t talk.  And when she asks why he has done something dangerous, he smartly asks her why she smokes.  These questions do not seem to get through to her.
Later, she becomes more anxious about Jamie’s progress (understandably—he’s 14-15) and enlists the help of Julie and Abbie, with both of whom, Jamie seems to have a close relationship.  She had already engaged William, thinking that Jamie needed a masculine influence  (never realizing until someone pointed it out that the two had little in common).
What follows is the story of young women influencing the development of a teenage boy.  Dorothea has grave misgivings from time to time, but when she confronts Julie and Abbie she gets her misconceptions corrected and is reassured (thanks to her trust and confidence in them).  This is a fine illustration of how motherhood can just be a muddling through, with no guarantee of the outcome.  Dorothea has many soul-searching moments about how she’s doing as a mother, but unlike most mothers, she has younger people close by to explain to her what is going on.
In observing Dorothea, we get the perspective of her generation, instructive to a fault, prone to deny anything negative (although anxious about it), but wanting to maintain control of a son’s life.  To her credit, she trusts her “family”, and steps aside for Julie and Abbie to be his primary advisers (not that they have everything together).  Williams gently supports and advises her, but is respectful of her space.
Perhaps this is a modern day fable about feminism and motherhood and how both need to accommodate to a changing world.  Women need help in their mothering and need to consider some of their own interests.  Men can help by being more sensitive to women and letting go of some of their feeling of responsibility for them.
Mike Mills, writer-director of the film, has said it is partially autobiographical, and I think that is apparent in his sensitivity to Dorothea’s situation as she perceives it and the different perspectives shown by the characters.  Above all, I appreciate his nonjudgmental, empathic depiction of the characters.
Bening, Fanning, Gerwig, and Crudup are perfect in their roles, and young Zumann is a treasure in his portrayal of a young man beset by so many influences.  Music by Roger Neill enhances every scene and helps us enjoy the lightheartedness of the whole production.

Motherhood as you’ve not seen it before.