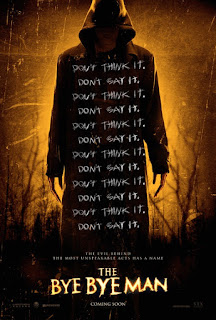 There are plenty of chills and thrills in the horror called The Bye Bye Man.  Devotees of the genre may find it too derivative of so many other haunted house productions, but one such viewer I sat with at the screening thinks it is great.
The movie opens with three college students wanting to move out of the college dorms into an off-campus house.  It looks like it’s in disrepair, but after finding furniture in the basement, the three decide to take it.  Elliot (Smith) and Sasha (Bonus) are a couple, and John (Laviscount) is Elliot’s best friend from childhood.  Soon after they move in, they throw a party, and Sasha invites her psychic friend Kim (Kanell) to conduct a séance because the house is a bit creepy, especially after she and Elliot have heard strange noises from time to time.  Sasha hopes that Kim will be able to give them more information so they can “cleanse” the house.  Elliot is skeptical about psychics and séances, but after he hears scratchings one night, and finds evidence of those scratches on the brick in the backyard the next morning, he becomes more concerned.
The strange happenings and hallucinations they begin to experience increase in the coming days, Sasha begins to develop a cough and feel fatigued, and John has some bizarre experiences with Kim.  Elliot decides to go to the school library and do some research, and Sasha talks to the owner of the house, but he dismisses her fears, saying she just needs to rest and take care of her cough.  Elliot does make progress in learning something of the history of the house, and the librarian gives him Dead File 69 (“dead file” means it was never published) written by a journalist named Redmond years before.
From the previews, you know that “Don’t say it” and “Don’t think it” are like mantras spoken and written in various places as warnings.  Actually saying The Name will get you killed.  Special effects, visual effects, and the music of The Newton Brothers accentuate the eeriness of the situation and the fears provoked by it.  Director Stacy Title has paced the story well, and the actors are skilled in conveying their puzzlement and rank fear.  James Kniest’s cinematography is likewise of high quality.
The author of the novel on which the film is based—Robert Damon Schneck—is a freelance writer who enjoys delving into accounts in American libraries about witches, ghosts, strange beings and paranormal activity in our cultural history.  The Bye Bye Man movie is based on one of his books telling about “strange-but-true tales” (The President’s Vampire:  Strange-but-True Tales of the United States of America, 2005).  The film—which may not reflect the book in this sense—has a couple of weak points in its plot.  For instance, why can’t the people who have figured out what is going on simply tell the story without revealing the actual name?  How has the librarian escaped the fate of those who do say the name and has not been “infected” before her encounter with Elliot?  She must have spoken of the story before.
Despite some weaknesses, the story is engaging, and the quality of the filming seems good enough to please those who are into the horror genre.

Don’t say it.  Don’t think it.  These instructions will be clear soon after the start of the film.