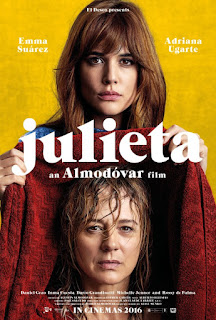 Beautiful stories don’t have to be happy all the time.  Young Julieta (Ugarte) is typical in her openness to new experiences and lust for life.  She meets and falls in love with a man on a train, and although there are frictions, they love each other and have a child, Antía (Delgado, Parés), who is close to both her parents.  But over time, a tragedy happens, and Antía has to devote much of her time to her mother, to the point that she as a teenager begins to feel trapped; whereupon she decides to attend a “camp” for three months.  When Julieta (Suárez) goes to pick her up, the cult-like camp counselor tells her that Antía has already left and does not want her mother to contact her.  Many years go by and Julieta only hears about her daughter once in a brief, chance encounter on the street with an old friend of Antía’s.
The film says something about mother-daughter relationships and the chance events that affect them, along with feelings people have about such events, for instance, blame and guilt.  Pedro Almodóvar possesses a lightning rod kind of sensitivity toward women and their experiences, which he captures in so many of his films.  Here in Julieta (based on the short stories of Alice Munro, who likewise captures the essence of women), he shows their capriciousness (getting engaged with and disengaging from men), the kinds of wedges that may come between them and those close to them (often unexpressed but deep resentments), and the pain of separation and loss (whether from death or estrangement).
Despite its truthfulness and engaging story, Julieta is not one of Almovódar’s greatest films; but it is well directed, and Emma Suárez and supporting actors Grao, Cuesta, and Grandinetti deliver very fine performances. Suárez has to transform her younger, vivacious personality through major grieving and finally into an attractive older woman, still open but at peace.

Women transitioning through life, making adaptations to accommodate to hardship.

Posted by donnarcopeland at 8:19 PM