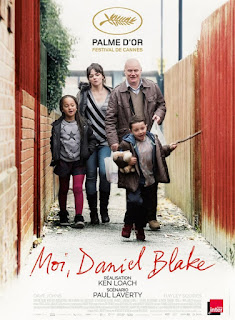 An older man, widower Daniel Blake (Dave Johns), has survived a major heart attack and is told by his doctor that he should not return to his carpentry job yet.  This means he needs financial assistance, but bumps up against an unforgiving bureaucracy.  He is told that to receive benefits, he must be looking for a job when he is not supposed to be working; moreover, he must answer the same questions over and over and fill out the application online, despite the fact that he doesn’t have the foggiest notion about how to do anything on a computer.  While waiting to be seen at social services, he takes pity on a young woman with two children, getting the first person in line to let her go ahead.  This gets them both in trouble, and they are told to leave.  Thus develops the unlikely friendship between two people who try to support one another through the frustrating coming weeks.
Katie (Squires) is new in Newcastle, having been forced to leave her previous apartment and supportive network in London.  She is having trouble getting a job to provide for her family, and must visit the food bank for supplies.  Since Daniel has handyman skills, he tries to make her apartment more livable, and she fixes meals for him, sometimes foregoing eating herself.  Additional dramas for the two include her arrest and Daniel getting mixed up in a neighbor’s questionable business.  But mostly, this is an indictment against the British system of social services for its inefficiency and lack of understanding for the people who need the services.
Most of actor Johns' previous work has been in television, but he seems perfectly suited for this role as a practical, simple man who is honest and charitable toward others.  Squires is a perfect counterpart, bringing freshness and a kind of earnestness to the action.  This is a quiet film—as Ken Loach’s films tend to be—quiet, but forceful in advocating for the little guy and those victimized by larger forces in society.

An eloquent plea for rationality and common sense in a system clearly not designed for those in need of its services.

Posted by donnarcopeland at 4:50 PM