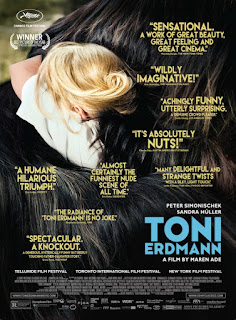 Awkward!  Being stalked by one’s parents as an adult working in international circles is unbelievably mortifying, but that is what happens to Ines (Hüller).  She is working so hard to close tricky deals in Bucharest, but her father Winfried Conradi/Toni Erdmann (Simonischek) appears unexpectedly out of the blue, often in some kind of disguise, pretending to be someone he is not, and making one gaffe after another.  Considering the hard-driving woman she is, I’m amazed at her patience and her allowing him to accompany her to business functions.
Ines is not without flaws herself.  She has been relatively inattentive to her parents.  She is unpredictable, intimidating to the men working with her, and self-entitled.  For example, she walks out of a massage at a spa because she is unhappy with the service, and when the manager comes to apologize, offer a different massage therapist, and inquire about what else he can do, she orders two glasses of champagne, fresh orange juice, and two club sandwiches.  (Her father is with her, of course.)  Then, when she gets a phone call wanting her to be somewhere else, she simply walks out before the refreshments are delivered.  Her rationale?  “My company spends a lot of money here.”
The film is long—over 2 ½ hours—too long in wondering why Ines can’t deal with the situation more effectively.  There are brief moments when Toni tries to have a serious conversation with Ines about things that really matter in life, but she whisks him off with “What is happiness?”  When she goes to take a nap one afternoon and leaves her phone in the living room, she is livid when she wakes up much later and finds that she had four important calls.  Why didn’t he wake her?  He says he tried.  (That’s another weird motif in the movie; Ines is constantly drifting off into a deep sleep.)
The ending is very clever, showing Ines figuring out a truth her father has been trying to convey, and showing her identification with him in a very weird sequence involving a party at her apartment and chasing after a masked figure in the park.  It has something to do with hanging onto moments—moments that make life worthwhile.
Toni Erdmann was well received at Cannes, being nominated for a Palme d’Or and winning a special award for its writer/director, Maren Ade, who has won many awards in her career.  Simonischek and Hüller make a great comedic team in their ability to pull off hilarious moments with deadpan faces.

Weirdness reigns in this film about life in the modern age.

Posted by donnarcopeland at 8:12 PM