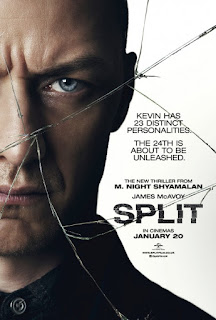 About as creepy as it can get in portraying a mentally ill person’s delusions.  James McAvoy is at the height of his performances in the depiction of someone with multiple personalities.  Here, he can be tough, mean, simple minded, and artsy, depending on which identity is “up.”  He does this mostly with facial expressions and body language, which makes his performance more impressive.  The psychiatrist treating him is pretty well portrayed and very well acted by Buckley as Dr. Fletcher.  How factual the representation of dissociative identity disorder is, I can’t really judge because I don’t have experience with that diagnosis, but it “rang true” from what I know.
My issue with this and other horror movies is that they linger a bit too long on moments of tension and tend to drag them out long after they’re plausible.  Most notable is the ending—which is not really an ending—in which a character has a chance to do just that (end things) and doesn’t. Another issue is that every scene with the women shows them to be fragile, easily rattled, and unable to take action.  The two girls abducted with Casey (Taylor-Joy), Marcia (Sula) and Claire (Richardson), really got on my nerves with the panicky breathing and hysterical behavior.  And although Dr. Fletcher is portrayed as a very competent therapist in most of the story, her portrayal toward the end is inconsistent with how she is portrayed professionally in the beginning.
The story begins with a father urging his daughter and her friend to be compassionate toward an odd, retiring classmate, Casey, and offer her a ride home.  But just as they are getting in the car, the father acknowledges someone approaching, and suddenly we see the stranger driving the car rather than the father.  This stranger is abducting the three girls.  He is “Kevin” (McAvoy) who will rain terror on them in the coming days.
Shyamalan has had an uneven career, with some of his work praised (Sixth Sense and perhaps Signs) and much of it criticized (Lady in the Water).  He is good at weaving a story that keeps the viewer mesmerized and interested in the esoteric, but at times he gets too caught up in the supernatural.  Here, he is good at introducing the main character with 23 personalities slowly, so the viewer’s reaction may be, “Is that the same person we just saw?”  And then the disorder we’re seeing becomes clear.
Another plus is Shyamalan fleshing out Casey’s character so that her current behavior and deportment are well accounted for by events in her childhood.

A mostly well crafted thriller that will make your skin crawl while you admire the star.

Posted by donnarcopeland at 5:04 PM