THE AUTOPSY OF JANE DOE 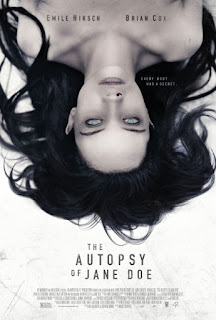 This thriller gets into the supernatural, along with the standard thunderstorm, bumps, and other strange happenings during the night.  Tommy (Cox) is the town’s coroner and has a mortuary business, employing his son Austin (Hirsch) as a medical technician.  They seem to be getting along reasonably well after the death of Austin’s mother, but Tommy is itching to venture out into the world.  He hasn’t had the nerve to tell Tommy yet, because he feels an obligation to stay and help his father.  He has a girlfriend, Emma (Lovibond), who is pressuring him to tell his father and follow through with their plan to relocate.
The men have just received four bodies from a burning house, and already find some puzzling signs.  On top of that, the sheriff brings in another body that was half buried in peat in the basement.  This is even more puzzling, and it gets weirder as they proceed to do an autopsy.  For starters, there are no outwardly visible signs of trauma, despite broken bones and internal injuries.  They decide to work through the night because the sheriff needs answers by the next morning.
The beginning of the story written by Ian B. Goldberg and Richard Naing takes time in developing the characters and setting up the mystery and alarming events that are to follow.  As Tommy is conducting the autopsy, we’re privy to his findings and the questions that arise.  This is very interesting to observe; however, he does seem to be going through the steps of an actual autopsy, so the squeamish might consider whether he/she is up to the film.
Norwegian Director Andre Ovredal and his staff know how to put together a horror film in terms of pacing, sound effects, camera action, and maintaining suspense, sprinkling in just enough reality-based effects to make the story more plausible.  Hirsch and Cox have good rapport, convincing as a father-son duo, and showing sheer terror when it looks like they’re trapped and being pursued by supernatural forces.  With virtually all of the scenes taking place in the confines of the morgue, the claustrophobic sense enhances the horror.  As the corpse, actress Kelly maintains utter stillness (a function of yoga practice) in her body staring blankly ahead with gray eyes.
The movie should keep horror fans happy and scared within its well-crafted story telling, sound effects, camera action, and solid performances.

A creepy thriller that captures your interest as you learn about autopsies, even while you wish to escape the claustrophobic atmosphere.

Posted by donnarcopeland at 5:07 PM