THE GIRL ON THE TRAIN 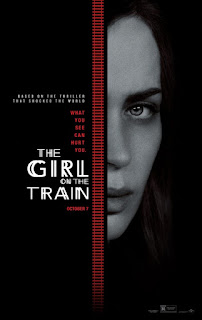 We meet Rachel (Blunt) on the train, see her scribbling and drawing on a pad, and listen to what is going on in her head.  She is clearly upset and depressed as she sips on a gin drink and weaves stories about the people she sees through the windows of houses.  Some are mixed in with her own memories, for she used to live in that neighborhood with her ex-husband Tom (Theroux).  Tom is married to Anna (Ferguson) now, and they have a child.  But a couple she sees in another house captures her imagination and her wish for a perfect marriage.  She has decided they are very happy together, an ideal couple—until she sees the woman in the arms of another man on the porch one morning.  She is furious with the woman, who reminds Rachel that her own husband left her for another woman.
We learn that Megan (Bennett) and Scott (Evans) are their names, which Rachel discovers when she reads in the newspaper that the woman is missing.  Imaginative Rachel weaves a story around what she has seen, and without distinguishing between her fantasies and reality, she inserts herself into the case by going to visit Scott and telling him that she saw Megan with another man one morning.  Furthermore, she claims that she knew Megan personally.
The film is good in this aspect of illustrating how memory is constructive, not photographic, and that many times, humans are prone to over-interpret what they see when they don’t have all the facts.  It’s of value as well to see how misleading and destructive it can be for someone with the best of intentions to muddy the waters when they assert themselves into situations where they don’t belong.
The Girl on the Train is a mystery and a thriller based on the popular Paula Hawkins novel.  It’s easy to see how it would attract filmmakers like Tate Taylor, the director, (and a hungry public as well) with its intrigue, mystery, scandal, and chameleon-like characters.  The problem, is to some extent, a function of its success, in that the characters and plot stretch credulity.  The book (which I’ve read) and the film would benefit from toning down a bit.  For instance, brutal scenes that take place in a populated area near a tunnel with a fair amount of pedestrian traffic are apparently not observed by anyone else.
On the positive side, the cast is very good, especially the star Emily Blunt in her ability to capture the complex Rachel, an imaginative alcoholic who appears spacey and impulsive much of the time, but can be smart and show genuine love and caring.  Haley Bennett as the mercurial Megan lives up to her recent reputation for playing sexy, strong, beautiful women.  Cameo roles by Allison Janney and Lisa Kudrow attest to their strengths in pungent character roles.  Men are not regarded too kindly in this movie, but Justin Theroux, Edgar Ramirez, and Luke Evans do justice to their roles and show strength behind their weak characters.
I have to complain once again about psychiatrists and other professional counselors being portrayed by Hollywood unrealistically in touching and hugging their patients and seeing them in their homes.  Mental Health professionals are all trained in how to deal with romantic pulls and patients appearing at our doors without an appointment—something not dealt with realistically in this film.
This is a film that will appeal to those who enjoy being pulled into a web of intrigue and excitement and don’t mind a bit of implausibility or being “played” by the novelist/filmmakers.

What is seen from a train may be enhanced by a vivid imagination.

Posted by donnarcopeland at 12:15 PM