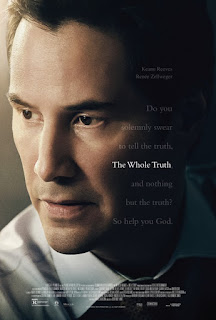 The whole truth comes out in dribs and drabs in this courtroom drama directed by Courtney Hunt, writer/director of Frozen River.  Young Mike Lassiter (Basso) is being tried for murdering his father Boone (Belushi), who has a reputation for being abusive to his wife.  Ramsey (Reeves), a friend of the family is his defense lawyer, but the problem is that Mike will not talk to him or anyone.  Ramsey pulls in another attorney (Mbitha-Raw) simply for window dressing and a strong nose for sensing lying.
One of the cleverest devices in the film is having courtroom scenes contain flashbacks showing a picture of the person’s memory as he/she is testifying, often suggesting that the person talking is not telling the whole truth, is mistaken, or is frankly lying.  Interestingly, in a key piece of evidence, we see none of this device.
The story states straight out that Mike confessed his guilt to the first officer on the scene, and his fingerprints are on the knife.  Ramsey at first takes the tack of showing Boone’s abusiveness toward his wife Loretta (Zellweger), as witnessed by many people, particularly those at a garden party six months before the murder.  When Mike insists on taking the stand, Ramsey and Loretta are horrified, but Mike does it anyway, revealing a major piece of evidence in the case.
The Whole Truth is not especially compelling in its plot, in that many will figure it out before it is revealed.  Reeves is a typical lawyer-type (and does an effective voice-over reminiscent of Verbal in The Usual Suspects) and Zellweger is a typical self-effacing, bullied wife.  Neither is particularly challenged in their roles, and Basso, being mute, basically just stares.  The strongest and most interesting character is played beautifully by Mbitha-Raw playing a “stooge” who is questioning and sharply figuring out the case as she goes along, much of which we see in her facial expressions.
It has been eight years since Courtney Hunt’s major successful picture, Frozen River; and she has written a few scripts for television shows in the meantime; but I guess it will take a bit longer for her to get back into her groove.

The whole truth may occur to you early on in this film.

Posted by donnarcopeland at 11:19 PM