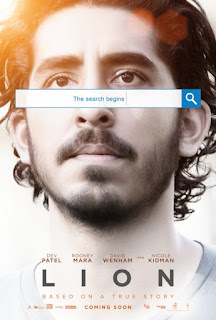 This is may be one of the most complicated adoption stories you will ever hear about, and it is based upon a true one.  Saroo (Pawar) is an incredibly industrious Indian child of about five who adores his older brother and wants to go everywhere with him for jobs.  (Their mother is single, supporting three children by gathering rocks.)  They do things like hop on a coal train and take some of the coal to sell in the city.  When Saroo insists on accompanying his brother on a job during the nighttime, Guduu tries as hard as he can to dissuade him.  Finally, the older boy relents, and takes Saroo with him.  When they arrive at their destination on the train, Saroo has fallen asleep and refuses to wake up, so Guduu goes on without him, instructing him to wait on a bench in the train station, and he’ll be back for him.  Time passes, Saroo awakens many times, but no Guduu.  He starts wandering, and realizes too late he is on a train that is moving.
Saroo ends up in Calcutta where they speak Bengali, but fortunately, many know Hindi, his language.  He wanders the streets for two months, gets picked up by a seemingly kind woman, but manages to escape when he realizes she has bad intentions.  Finally, he is picked up by officials who are charged with getting homeless children off the streets, and put in a kind of orphanage.
By something of a miracle—but probably also because of his positive qualities—an Australian couple has asked to adopt Saroo, and he is on the plane to Tanzania.  The rest of the story is about his life there with his new parents, Sue (Kidman) and John (Wenham), and eventually another adopted Indian child who becomes his brother.  Twenty years go by and the story continues with Dev Patel in the role of Saroo.
Despite being very happy in his new home, Saroo’s wish to recapture his Indian identity grows to the point he becomes obsessed with it.  He studies maps and train schedules, using Google Earth and his memory of places to figure out where his family might be.  He is sure they have wondered and worried about him all these years, but his separation from them prompts questions about his own identity:  “I’m from Calcutta…no, I’m not from Calcutta; I’m lost.”  His search is made more complicated by the fact that the child mispronounced the name of his hometown and didn’t realize his real name was Indian for ‘Lion.’
Lion is based on Saroo Brierley’s novel about his life in the 1980’s-90’s, and at the end of the film we are treated to footage of the actual people in the real-life drama.  The film is truly artistic in its presentation by Australian Director Garth Davis (Mini-series “Top of the Lake”) and the cast and crew.  Davis’ directorial work has been nominated for numerous international awards, including coming in second this year for the People’s Choice Award at the Toronto Film Festival for Lion.  Casting for Lion is strong, with Dev Patel and Nicole Kidman already being mentioned as possibilities for Oscar nominations.  The child actor for Saroo, Sunny Pawar, is enchanting in his portrayal of the feisty, smart, industrious boy who combines these qualities with thoughtfulness and caring.
Music by Volker Bertelman and Dustin O’Halloran forms a significant component in the film, particularly since there is little dialog in long sequences (e.g., when Saroo is alone and trying to find his brother), and its beauty in mood and tunefulness makes its presence known in every scene.  Cinematographer Greig Fraser likewise makes his work an integral part of the story, with the camera guiding us through mazes in cities and then sweeping through the teeming millions in the city or the breathtaking landscapes of Tanzania.

An intriguing and inspiring “lost and found” story.