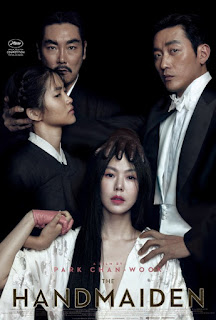 This is a strange, mysterious tale about a young girl being chosen to be the handmaiden to a wealthy Japanese lady in South Korea.  It opens with the girl Kim (Tae-ri) handing over a baby she has been tending to, to an older woman and is soon taken by carriage to a mansion in the deep woods.  She has been trained to be an excellent pickpocket, and is told by her conman associate Count Fujiwara (Ha) of his plan for her to help him seduce her new mistress, Lady Hideko (Kim), a Japanese heiress.  He wants to marry Hideko and finagle her out of her fortune.
Hideko is generous with Kim, and the two develop a close bond, because Hideko has been kept in her uncle’s house for years with little or no socialization.  He is an investor in rare books, has a gigantic library, and has Hideko read to him every day.  When Count Fujiwara comes to visit, Kim does everything she can to foster their courtship.
The film is in three parts, the first being about the Count and Kim planning on getting Hideko declared insane and put into an asylum after the marriage and his managing to get control of her assets.  The problem is that Kim had not counted on her and Hideko developing a close bond, so she becomes ambivalent.  The second part is more about Hideko’s harsh upbringing in the hands of her relatives.  Alliances shift all during the story, and there is a final shift in the third part.  These shifts and differing perspectives provide much of the fascination of The Handmaiden.
Just as much, Chan-Wook Park‘s direction, the music, and cinematography enhance the mystery and mystique of the work.  It manages to be a completely absorbing tale, suspenseful, erotic, and even humorous by turn with its many-layered characters and exotic settings—and brief horrific torture.  He has successfully adapted Alice Waters’ British novel and BBC television series (Fingersmith) into an Asian rendition.  Park manages to slip in some political references to the Japanese occupation of Korea, which further supports one of his major topics, the bridging of cultures and social classes.
Sensitive audiences should know that the film contains explicit sex, nudity, and violence.

An exotic, entertaining tale with suspense, intrigue and humor.

Posted by donnarcopeland at 1:36 PM