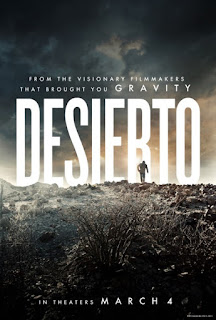 Desierto depicts the arduous, dangerous trek undocumented workers from the south make, trying to reach the U.S. in hopes of a better life.  Jonás Cuarón co-wrote, directed and produced the film in collaboration with his renowned filmmaker father, Alfonso (Gravity, Y Tu Mama Tambien, Children of Men) as producer.  A previous joint effort by the father and son include the multiply award-winning blockbuster, Gravity.
When a truck carrying a group of 14 hopefuls breaks down in the middle of the desert, the driver tells them and his unwilling assistant they will have to go the rest of the way on foot.  Unfortunately for them, a self-appointed vigilante (Jeffrey Dean Morgan) with a high-powered rifle and a well-trained tracking dog is roaming around trying to find them after he sees their tracks.  From there on, the film is essentially following the group and their pursuer as they laboriously make their way, not knowing exactly which way to go.  It’s a mournful, discouraging story made all too real by similar accounts we read about in the newspapers.  In view of current attitudes toward immigrants, the Cuaróns hope to rouse some sympathy for those who are so desperate to get here they undergo uncommon horrors in addition to the blazing sun and thirst.
Filmed in Baja California, Cinematographer Damian Garcia captures the beauty and desolation of the desert around the border, accompanied by the haunting music of Woodkid.  Bernal is a gifted and experienced actor, and he is up to his usual performance here; and it’s a good thing because he is the only admirable character in the film.  Jeffrey Dean Morgan, whom I see as a white-skinned Benecio del Toro, effectively plays a sinister, bitter guy whose favorite recreation seems to be tracking prey and getting his thrills from hitting the mark.
Desierto does fill the viewer with suspense and dread as intended by Jonás Cuarón, but viewing does become tedious at times without much happening besides the tension-filled chase, except for a few dramatic episodes sprinkled in here and there.  Perhaps it would have helped if the back-stories of more of the characters were told.  We hear only a bit about two, so don’t have much of an investment in the others.  The most serious missing back-story is that of Sam (Morgan).  I would have loved to make sense of his character by having more details about his journey in life.  And by the way, why doesn’t he have a mobile phone?  I understand that even smugglers are using them nowadays to guide their charges through the desert.  But maybe this is set in an earlier time.

The exhausting, dangerous journey of undocumented workers trying to make it to the U.S.