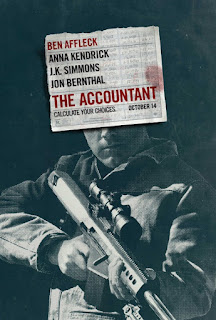 Don’t let the title mislead you; this is a crafty, entertaining thriller with rapid plot twists and shifting identities.  Not what you ever imagined an accountant’s life to be like.  But Christian Wolff (Affleck), the accountant in this story, grew up “different” (Asperger’s Syndrome, a form of autism) with a military father who pushed him to overcome weakness and deal with taunts and bullying he was encountering.  Training included fostering his innate talent for numbers, family loyalty, martial arts and target practice.  So Christian (take note of the name’s associations) then becomes a fairly unique individual with Robinhood values, which makes this film a character study as well as an action thriller, showing the influence of early family relationships and events on adulthood in this and other characters.
Director Gavin O’Connor enhances the mystery quotient by jumping back and forth in time [which I normally detest, but it works here], showing events in Christian’s life and an FBI investigation.  Mystery is inserted by withholding reasons why, for instance, FBI Director Raymond King (Simmons) is pursuing a perp he calls “The Accountant”, and charges one of his supervisees, Marybeth Medina (Addai-Robinson), to smoke this guy out.  (We’re given satisfaction later as to its importance to him.)
It’s an amazing—although still plausible—story involving a savant mathematician, big corporations, underworld crime, FBI investigations, and a young well-meaning accountant (Kendrick) who unwittingly blows the whistle at a prominent company, thereby setting off a chain of events no one expects.
O’Connor has done extremely well in putting Bill Dubuque’s screenplay on film, using their combined knowledge of cinema, human psychology and families to create a compelling tale that is more than a simple thriller.  This film would not have worked nearly as well without the personal histories of Christian, Ray, and Marybeth; they fit together exquisitely with—something I loved—a kind of tenderness running through.  On top of all this, there is a “coming together” at the end, which is priceless.
The actors are well cast, with the ever-talented Ben Affleck taking the lead, but with strong support from Anna Kendrick, J. K. Simmons, Cynthia Addai-Robinson, Jeffrey Tambor, and John Lithgow.  Each one of these actors has stellar performances in showing their vulnerabilities:  Affleck as an autistic, Kendrick as a bright but repressed artist-mathematician, Simmons as an FBI agent with insight and heart, Addai-Robinson as one whose secret is outed but hopes diligence will save her, Tambor as an inmate who’s reformed and has acquired character, and Lithgow who is gobsmacked by just about everything going on around him.
Mark Isham’s music and Seamus McGarvey’s cinematography are the behind-the-scenes enhancements that help make this film significant.

This film has all the elements that many of us go to the movies for.

Posted by donnarcopeland at 7:32 AM