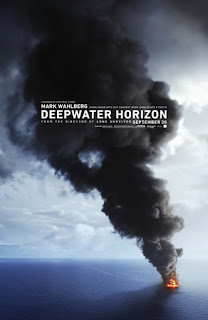 This is a thrilling, tense movie, but I wished I had had a tutorial about offshore oil drilling before I saw it; explaining, for instance, some of the jobs of the main characters, what the significance of mud is (it's oil), what kinds of tests were needed to assure safety, and so on.  I acknowledge that it’s not really necessary to understand these things to get a sense of the experience of a gas well blowing up, but since I like to learn things from movies, that would be my preference.  Instead of that, the filmmakers chose to open with the testimony of one of the survivors at a hearing.  The value of this is in knowing later, during the blow-up when you’re biting your nails, that this person will survive.
Peter Berg and the writers Matthew Michael Carnahan and Matthew Sand have chosen to give us a candid look at one of the main characters, Mike Williams (Wahlberg), who is married to Felicity (Hudson) and has a young girl he adores.  She idolizes him, and writes stories about his work that tie into her current interest in dinosaurs.  But we learn almost nothing about any of the other characters except Andrea (Rodriguez), one of the few (only?) women working on the rig who prides herself on her mechanical knowledge.  She represents women well in her expertise, her calmness, and her practicality in an emergency situation—most of the time.  In the end, her character is made to be a bit wimpy, but it’s hard to say how much of that is real and how much of it was in the screenwriters’ dramatizing hands.
It’s fascinating to get a glimpse into the world of offshore drilling populated mostly with males who only know how to tease and talk rudely with one another.  But what comes through as well is the importance of knowledge, experience, and judgment in a job that could affect hundreds of people.  Deals among big international companies to collaborate on a project often underestimate the implications for those down the chain of command.  Here, BP, Transocean, and Schlumberger are all involved.  The story begins with the issue of the project’s being behind in its schedule, with the money people monitoring the cost and wanting to skip some tests of rig operations and safety.
Long story short—corners should not have been cut in jobs like these.  Safety of the workers and the rig should be front and center.  Ah, but human fallibility and hubris must be taken into account.  In the end, the companies involved have been held accountable—to some extent.  And there are always heroes in situations like these, which inspire us and renew our faith in humankind.
I think the real stars of this tantalizing film are the special effects, sound, and cinematography (Enrique Chediak) artists.  It really does feel like you are on an oilrig and everything is blowing up around you and fiery things are raining down on you during the conflagration.  I certainly never realized how noisy it is on a rig even when everything is going according to plan.  I guess that’s why I saw so many ear plugs/hearing aids in the workers’ ears.
That being said, Mark Wahlberg, Kurt Russell, and Gina Rodriguez give stellar performances of heroes willing to risk their lives for others, and John Malkovich always nails the baddy role subtly and perfectly.

See the fiery inferno at sea and be amazed.

Posted by donnarcopeland at 2:23 PM