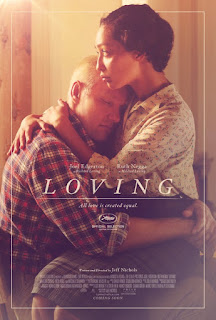 Another Jeff Nichols (Mud, Take Shelter, Midnight Special) film that quietly pulls at your heart and reason and captures your attention.  It’s aptly entitled because the last name of the interracial couple having to buck Virginia’s outdated law against their union is Loving.  When their case, championed by the ACLU, goes to the Supreme Court, and the attorney asks Richard (Edgerton) what he wants to say to the Court, Richard’s answer is simply “I love my wife.”  Nichols wrote the screenplay based on an actual case, but he dramatized it, using as much information as he could glean about the actual case.  In the Q&A after the screening in Austin, Texas, he said all the legal information he gathered would have made a very boring movie, so he chose to write a drama, keeping the focus on the couple.
Loving is about an interracial couple in the ‘50s-‘60s who defied Virginia law against miscegenation by going to Washington D.C. to get married, and upon returning home living together as husband and wife.  They lead a normal life in a family atmosphere, unaware of a “snitch” who informs the local police.
The Lovings are an interesting twosome—she is only 19 when they marry (in Washington D.C.)—and he takes his responsibility for caring for her seriously.  So when they are roused from a deep sleep by policemen invading their bedroom one night and hauling them into jail, we see the beginnings of his disillusionment (“It’s just not right”) and mystification, although he continues to accommodate to the sentencing they receive (which is lighter than it otherwise would have been, thanks to a sympathetic local lawyer who is a friend of the judge), which uproots them from their home and her family to the city of Washington D.C.  He is a good honest worker-type who diligently drives back to their hometown every day for work.
As time goes on (marked by seasons changing and children being born), Mildred (Negga) develops more confidence and assertiveness, so when her relative giving them accommodations in Washington says to her during the Civil Rights marches in the ‘60s, “Write to Robert Kennedy; you need to get you some civil rights”, Mildred does just that, which gets the ACLU involved.  It’s at this point that we see Mildred’s gradual transformation into a sharp woman who comprehends what the lawyers and press are telling her and becomes aware of the social significance and implications of their pressing forward.
Another thing I love about Nichols’ writing is that he makes this transformation positive and non-threatening to Richard, partly because of her loving nature, but partly because his inner strength makes him thoughtful and, once again, accommodating, always from a strong position.  (The movie could be an inspiration for couples in achieving equality in their relationship, along with its message about equality for all citizens.)
The casting of these two characters could not have been better.  Ruth Negga epitomizes a woman we can admire in any age—tender, sharp, decisive in a quiet way, sympathetic, and empathetic.  [For fun, you can contrast this with Richard’s mother (Sharon Blackwood), a midwife, who is scary looking when we first meet her, devoid of emotion and issuing out instructions, yet still supportive of her patients.  It’s unnerving later to see her as a doting grandmother, but that is Nichols again capturing human nature in all its variances.]
Joel Edgerton should be highly praised for portraying this character who is eloquent in nonverbal language but terse or reticent verbally.  His facial expressions, eyes, body language, and cryptic comments give you a full picture of who he is, what he values, and what he is about.  Both Edgerton and Negga embody Nichols’ subtlety and accuracy in honing in on the human psyche with all its complexities.
With all the low-key drama, we also get to chuckle, as for instance, when Richard is evaluating the value of ACLU lawyers—for which there is no charge—he says wryly and cynically, “You get what you pay for.”  For all his crustiness and terse observations, Richard is the most comedic character.

Posted by donnarcopeland at 10:26 AM