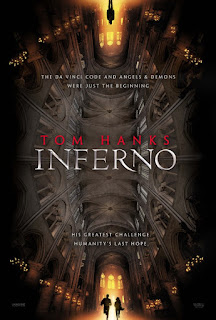 Inferno is based on the fourth book by Dan Brown about Cambridge symbolist Robert Langdon (Angels & Demons, The DaVinci Code, The Lost Symbol), who solves puzzles and crimes by interpreting the symbols associated with them.  This film opens with Langdon (Hanks) in the hospital following a head wound and suffering retrograde amnesia.  He can’t remember what happened to him, at least for the time being.  He’s given some information from his doctor, Sienna Brooks (Jones), but when bullet fire begins, she helps him escape and takes him to her apartment.
It takes a fair amount of time, skirmishes, and new characters like Bouchard (Sy) Sims (Khan), and Sinksy (Knudsen) showing up for Langdon to get a full picture of what is going on.  In the meantime, he and Brooks are running from assassins while Langdon tries to solve the puzzle of why this is happening.  They’re in the Palazzo Vecchio in Florence; then with more clues, they run to Venice, and finally must go to Istanbul to fill in the last of the puzzle.
Director Ron Howard has made this an action film with much less time spent on presenting and deciphering clues as happened in the previous two works.  As a result, it is much less engaging.  The threat of a virus that has the potential to wipe out half of the world’s population adds some excitement, along with finding out more about the characters responsible (e.g., Zobrist, played by Foster).  But again, character development is weak, so we don’t know much more about him, only about his idealistic plan.
Tom Hanks plays the befuddled hero well, as he has done with so many such characters.  Supporting actors Jones, Sy, Khan, Knudsen, and Foster likewise portray their roles well.  The ending with Langdon and Sinsky leaves much to be desired in its nostalgic parting of ways.
I’m not sure why this film was made.  I think maybe everyone involved signed on early on, but perhaps by the time shooting began, enthusiasm had waned considerably.

This is only for diehard Dan Brown/Robert Langdon fans.