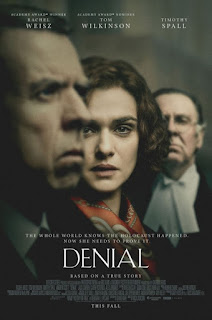 Picture an intelligent, attractive young woman who is a professor of history at Emory University in Atlanta.  Deborah Lipstadt’s (Weisz) area of expertise is the Holocaust, and she has written a book about it.  She is gutsy, organized and articulate, and it’s obvious that her students respect her.  Suddenly, an odd looking gentleman begins lurking at the top of the theater style auditorium where she is lecturing, and during the Q&A intrudes on her class.  As a Hitler apologist, he starts arguing that she is wrong about the Jews being persecuted.  She knows who David Irving (Spall) is, a “pretend” historian she has previously criticized by drawing a distinction between the facts and his opinion.  He won’t shut up, so security is called.  Unbeknownst to her, he has an accomplice film her making critical statements about him, and two years later she receives notice that he is suing her for defamation and ruining his reputation.
The interesting part of the film is that he is suing her in a British court, where, unlike in the U.S., where a defendant is innocent until proven guilty; in London, it is upon her to prove her innocence.  I say this is interesting because an aspect of this film is showing legal procedurals, some distinctly British, but some I take it are common to both countries.  But the director (Mick Jackson) has made a very intelligent film based on Deborah Lipstadt’s novel (David Hare, screenplay) in which the legal strategies are entertaining and instructive, but in addition, we see how they affect an independent, outspoken, learned woman who is emotionally/culturally sensitive.  So in all, there is conflict in legal approach as well as conflict between Lipstadt and Irving, with social sensitivities and concerns mixed in.  Not only does Deborah want to testify, she wants Holocaust survivors to appear on the stand as well.
Her team of lawyers, Anthony Julius (Scott), Richard Rampton (Wilkinson), and their assistants have a different plan, one based on logic in which emotion is minimized.  She is incredulous that they don’t want her on the stand, or talking to reporters, or bringing in survivors.  Moreover, they want to go before a judge rather than a jury.  “What?!”, says Deborah, “the truth of the Holocaust is to be decided by one man?”  She wrestles with the team every step of the way, and the naïve (to law) viewer will feel sympathy for her.  This provides the tension in the film; is the legal team’s strategy hair-brained or is it brilliant? Her attorneys explain the difference between putting the Holocaust on trial vs. keeping the focus on Irving, his veracity, and his motivations.
I am impressed with Rachel Weisz’s acting range through the years, and notably this year, she plays an aggrieved mother in The Light between Oceans, a chameleon figure in Complete Unknown, and now a university professor in Denial.  In all three, she lights up the stage with immersion in her character.  Tom Wilkinson is his usual expert actor here, showing his character’s unassuming manner, dedication to his work, occasional self-doubts, and warm compassion.  Andrew Scott lends flash and charisma to a complicated character who can be playful as well as deadly serious.  The music by Howard Shore and cinematography by Hares Zumbarloukas contribute greatly to the mood, beauty, and drama in Denial.
Denial falters a bit at the end when closing scenes are dragged out beyond a reasonable length, as if audience suspense needed to be hyped up.

An intelligent picture with legal strategy, personality, and social conscience all interacting.

Posted by donnarcopeland at 11:17 AM